Kyle “Bugha” Giersdorf is a 17-year-old professional American Fortnite player hailing from Pennsylvania. He currently competes for the Sentinels eSports team, and won the title of Fortnite 2019 World Champion and won the $3 million prize. Giersdorf qualified immediately during the first week of the Solos rounds, skyrocketing his popularity to Tfue’s levels.

Bugha prefers playing Fortnite Battle Royale, where he dedicates eight hours a day to play the popular battle royale game. He began his YouTube career back in June of 2015 but did not post anything gaming-related until the middle of 2018. Today, over 1.9 million people have subscribed to his channel, where it averages more than 300k views per-video. Some of his most popular videos to date include “Build Battle Montage”, “How I Became The Strongest Fortnite Pro” and “Tfue and Bugha Attempt Arena Kill Record”.

Aside from his big payout during the 2019 Fortnite Championship Series, Bugha made more than $25,000 in earnings across 12 tournament showings. He also makes regular earnings off Twitch and YouTube. His first foray into eSports began with the No Clout team in April 2018, where partook in the North American Share the Love, Scallywag Cup, and World Cup Warmup competitions. He departed No Clout in August of 2019 and later joined the Sentinels’ Fortnite team roster in March 2019. Along with Fortnite, the Sentinels are also active in Overwatch, League of Legends and Hearthstone.

Fortnite is like any other game where superior control is everything. A slight key input delay could mean the difference between victory or defeat in solo or team matchups. Like any other player, Bugha has his personal preferences when it comes to gaming gear. We’ll be reviewing the three keyboards that he has used during his eSports career that makes him such a successful player within the Fortnite franchise.

What Keyboard Does Bugha Use Currently? 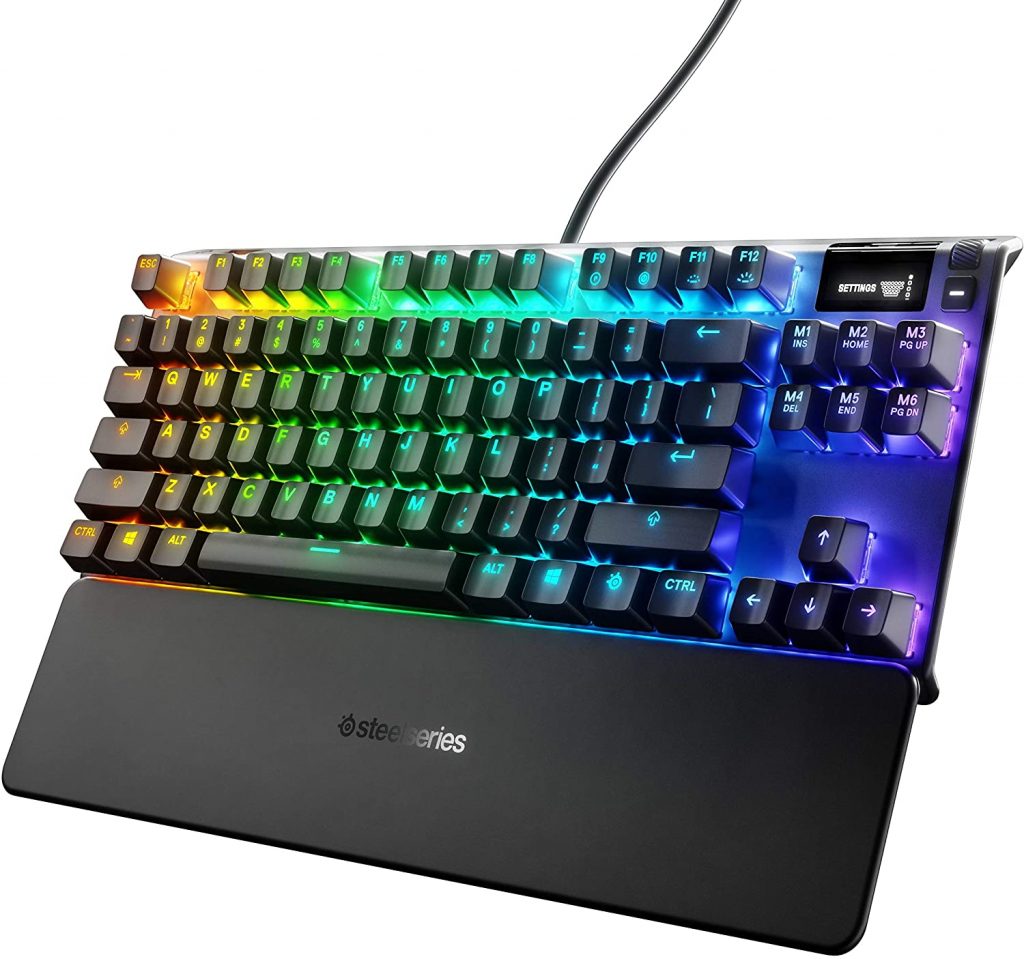 The APEX PRO TKL keyboard is a solidly-built keyboard that provides superior in-game control for Fortnite. The keys are hyper-responsive, where each key can be individually customized according to a person’s sensitivity level, regardless if it’s for gaming or work. We conducted testing on a word document to test out the keyboard’s sensitivity and was surprised at the input-to-display response, with no delays whatsoever. The magnetic wrist rest adds a nice touch to the keyboard, where it can be attached or detached with ease.

The top right of the keyboard comes with software-free customization, such as an OLED smart display that intelligently displays data straight from your game without the need to alt-tab to another screen and gets vital in-game stats from games such as CS: GO or messages from Discord. On the top right of the keyboard, there is a metallic wheel that acts as a multimedia controller that allows you to do many things, including rewinding, skipping, and pausing. The APEX PRO TKL is also not waterproof, so you will need to be careful whenever you have beverages or any other liquids near the keyboard.

It comes to no surprise that Bugha used this keyboard to help him win some of his more tense moments during the Fortnite championship series. The APEX PRO TKL offers him a rugged design that can withstand quick keystrokes while able to respond to his commands instantaneously. 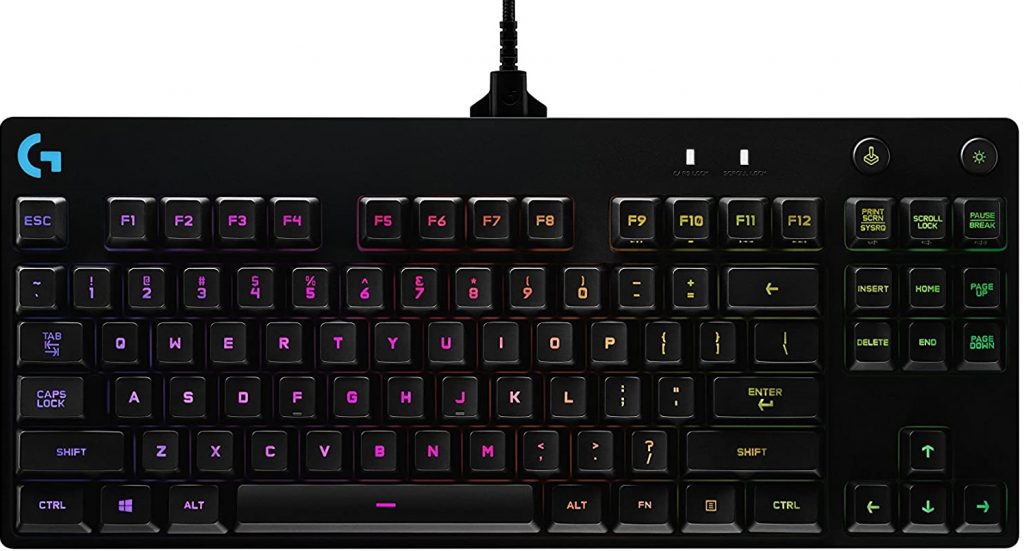 Logitech develops robust keyboards within its peripheral device inventory, and the G Pro gaming keyboard is no exception. The Pro Gaming keyboard is equipped with Romer G switches to deliver faster actuation by 25% compared to regular mechanical keyboards. The Romer G keys are special since they are rated for over 70 million keystrokes.

From one Pennsylvanian to another, keep representing! 🤟🏼⚽️ @cpulisic_10 pic.twitter.com/NC9Ptxli01

On the gaming side, the keyboard automatically displays gaming profiles for over 300+ games and displays them on the G Pro keyboard when the game launches. Game Mode lets you play your games uninterrupted and prevents you from fat-fingering if you accidentally hit the wrong key during a gaming session. Compared to other keyboards, the Portable keyboard is slightly smaller than its counterparts listed in the review.

The clacks that you hear with every keystroke is something to behold. The sleek and compact design of the keyboard doesn’t take up too much space, allowing you to tack on extra peripherals that you can use with your gaming experience. There’s also a three-step angle adjustment built into the bottom of the keyboard where it can be adjusted for your comfort.

Bugha would bring this keyboard on hand whenever he needs to break out his equipment and get ready to participate in the games quickly. The portability of the keyboard makes it ideal to utilize a laptop if you need a keyboard that is more responsive to your key inputs compared to a regular mechanical keyboard or a laptop keyboard. Bugha won the World Cup using this keyboard. 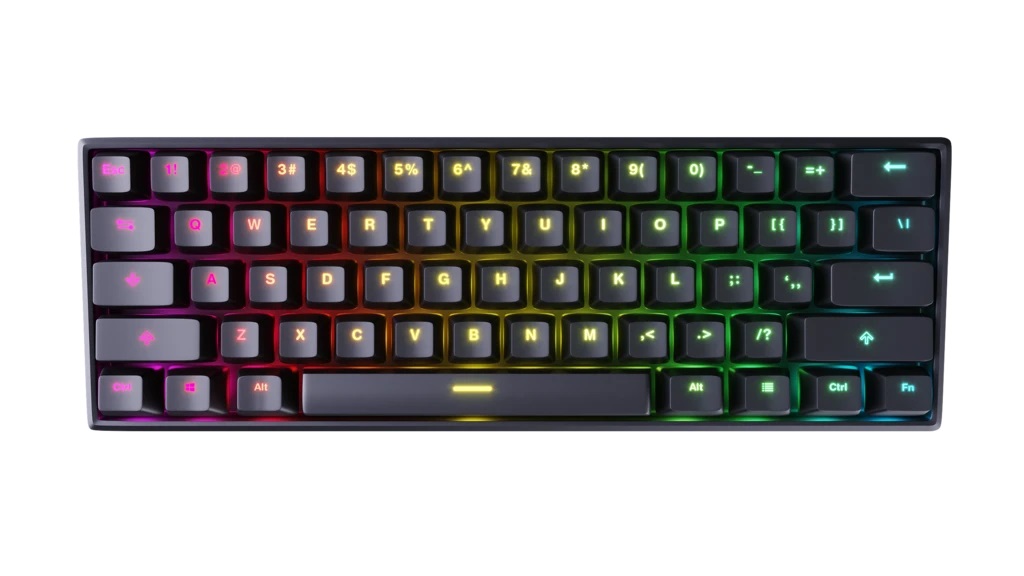 The Matrix Elite 60% keyboard recently came into the gaming scene in 2019, making its mark among pro gamers. The keyboard is manufactured with the GK 61 standard, which is fairly common among gaming keyboard brands. Matrix’s water-resistant Pro Mini keyboard features Gateron switches where key inputs are immediate. The company also offers red, blue and brown switches to match individual preferences. LED lighting on the keyboard is fairly bright, able to provide a decent amount of illumination if you’re playing in a dark space.

While the keyboard itself is responsive when it comes to gaming and other functions, it doesn’t offer much in terms of physical comfort. It’s slightly angled via a permanent plastic base. Since it’s a minimalist keyboard, you will have to purchase a separate wrist rest to not strain your wrists. The arrow keys are somewhat odd, as they require the use of the right ‘Fn’ key to use them. Instead of the traditional arrow keys, the right Alt.

It doesn’t require too much key customization if you’re already comfortable with playing with Fortnite’s default settings. However, if you key-bind your keys often, you might want to consider another keyboard as the Matrix Elite does not come with any software support. Just like the other keyboards listed, Bugha would use this keyboard since it’s already optimized for gameplay in Fortnite. 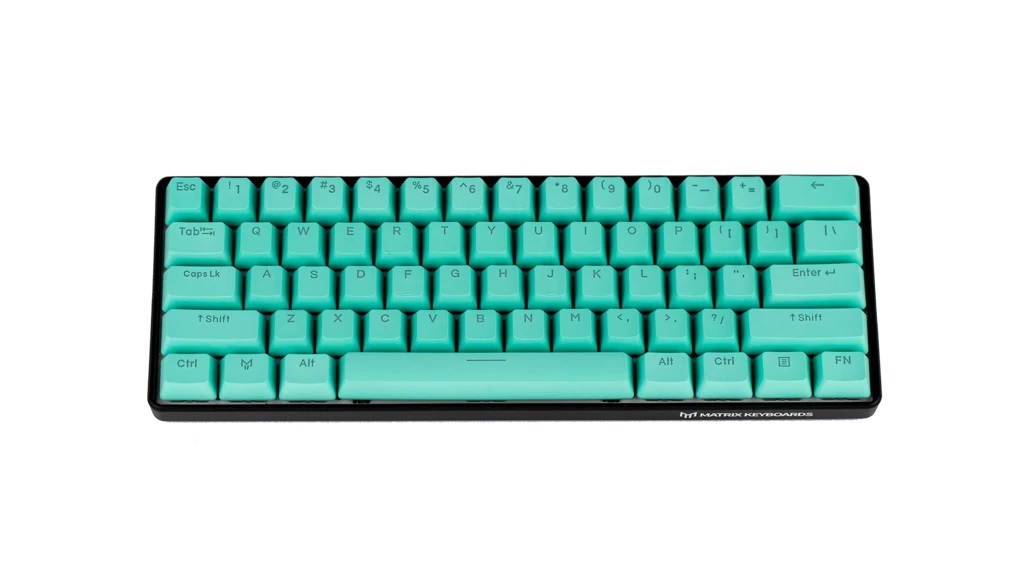 The Matrix Mint PBT keycaps are fairly bright and stand out easily due to the coloration of the keys themselves. We opted to conduct some testing of the keycaps on one of our own GK 61 keyboards. The keycaps when it comes to inputs are very crisp. You will need to purchase a GK 61 keyboard that is compatible with these keys if you want to use them.

Matrix backlight PBT keycaps are difficult to come by, as they are extremely popular in the gaming world. This is because the keycaps themselves are bright, and serves as a wonderful supplement to RGB keyboards that are Cherry MX-capable. The fonts are very clear, regardless if they’re backlit by RGB lighting or not.

The backlit keycaps come in four colors that can result in eight different sets:

These keycaps are well-built and work with RGB keyboards. Bugha has some of these keys within his goodie bag to swap out on his keyboards to distinguish the keys he would normally use during gameplay. This helps him to contrast against the other keys on the keyboard. On top of the keys also lets him show off since they’re very nice-looking keycaps.

As a gamer, you know how your peripherals, especially the keyboard, can significantly enhance your gaming experience. There are keyboards built with features geared towards gaming, and you must choose the one that suits your play style.

Things To Consider Before Buying a Keyboard

Bugha didn’t just choose the above-mentioned keyboards randomly, and so shouldn’t you. Conversely, just because Bugha uses the keyboards featured in this article doesn’t mean you should, too.

To make sure that a keyboard matches your preferences, here are some of the most important things you should check before making a decision:

Does It Have To Be Mechanical?

Gaming keyboards aren’t made the same. Some are made with tougher materials, while others are centered around other features. Apart from the type of material used for the exterior, keyboards are either membrane or mechanical.

If a gaming keyboard isn’t tactile, chances are it uses rubber silicone underneath the keys. Membrane-based keyboards are inexpensive and aren’t as responsive as their mechanical counterparts.

Membrane keyboards may be great for the average user, but because of the mushy feel and the lack of distinct “click,” users have a hard time telling if their keypress was actually registered.

When playing fast-paced games like Overwatch, Apex Legends, or Valorant, you want to respond quickly and accurately, which is why mechanical keyboards are ideal for gaming.

Unlike membrane keyboards that use silicone material, each key on mechanical keyboards has a dedicated mechanical switch. These switches have stems, springs, keys, and housings to deliver a tactile response.

Due to how mechanical keyboards are constructed, you will hear an audible sound that is unique depending on how the key switches are built. There are various types of mechanical switch types, all of which offer different resistance and loudness when pressed.

The tactile keypress is also accompanied by how fast the keypress is registered. Other mechanical keyboards are equipped with switches made to offer better feedback and precision than membrane keys. They are also more durable, designed to withstand up to 50 million clicks before needing replacement.

Lastly, some mechanical keys can be swapped for custom-made switches. If you’re looking to achieve a fully-customized setup, this feature alone should garner your interest.

When buying a gaming keyboard, you should consider how much you are willing to spend. The larger your budget, the more features and better performance you are getting. In mechanical keyboards, that translates to stellar backlighting, better switch quality, or a more durable chassis.

Ideally, you want to save up and spend anywhere between $100 and $150 for a gaming keyboard. You will find decent models from reputable companies like Corsair, Razer, and Logitech in this price range.

If you are planning to spend more than $150, then the sky is the limit. This bracket is where you will find premium-grade keyboards that offer top-of-the-line switches and endless customization options.

Another thing you have to consider when buying gaming keyboards is the layout. There are plenty of mechanical keyboard layouts and variations. Among the most popular are TKL and 60% keyboards.

Regular keyboards are called full-size keyboards, and they usually have 101 keys. While it is true that having more keys gives you the option to do more, they sometimes compromise your experience when playing games.

Because smaller keyboards give players better comfort in specific situations, gamers like Bugha opt for either 60%, 40%, or TKL keyboards. To learn more about these variations, check our portable mechanical keyboard sizes and variations article.

What Other Features Does It Offer?

Having macro keys lets you do more than the average gamer since you can map these keys to perform various purposes. These keys can also be used to cast skills in MMORPGs.