The graphics card is an essential part of any gaming rig. RGB features may not impact your gameplay directly, but they create a soothing ambiance for a more immersive experience.

With all the new graphics cards released recently, knowing which product fits your needs and preferences is crucial.

In this article, we cover the best RGB GPU you can buy today. We also discuss the factors you need to consider to become an educated buyer. 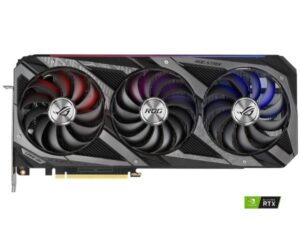 If you are just looking for the best GPU on the market, look no further than the ASUS ROG Strix NVIDIA GeForce RTX 3090. This graphics card is packed with cutting-edge features to handle virtually anything you throw at it. It has 24 GB of GDDR6X SDRAM and a whopping 19500 MHz memory speed to run games in 4K or 8K resolution.

The ROG Strix RTX 3090 is equipped with Axial-tech fans to help maintain low temperatures under load. The barrier ring on the side fans is also trimmed down to allow more airflow through the cooling array. This card also has an LED indicator that signals when a component is incompatible.

The ROG Strix RTX 3090 has a base clock of 1695 MHz, which can be boosted to 1725 MHz. With this card at your disposal, you can play any game without visual compromises.

The ROG Strix RTX 3090 utilizes Ampere chip architecture to deliver next-generation technology to consumers. Compared to the previous-generation cards, it has more metal and features a new rotation scheme designed to improve airflow. The shortened PCB also has something up its sleeves as it allows hot air to escape towards the chassis exhaust fan. Meanwhile, the metal accents the card to blend into personalized builds seamlessly. The RGB lighting that wraps around the graphics card’s side can also be customized to your liking.

With GPU Tweak II, you can take this monstrous graphics card to the next level. This software lets you adjust critical parameters, such as memory frequency, core clocks, and voltage settings. You can even monitor everything in real-time through an on-screen display.

Stellar Performance and Aesthetics in One Package 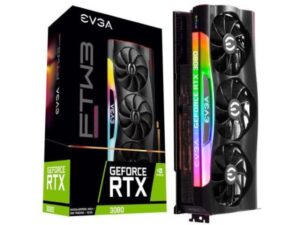 Apart from being one of the best-performing cards on this list, the EVGA GeForce RTX 3080 FTW3 Ultra Gaming is also one of the most stylish and the easiest to overclock. However, the card is so massive that it includes a metal support bracket in the box. It takes nearly three slots when installed inside the case.

The RTX 3080 FTW3 Ultra comes with three 8-pin power connectors. While the third connector doesn’t provide much benefit out of the box, it comes in handy if you decide to overclock the GPU.

Something we like about the RTX 3080 FTW3 Ultra is the Precision X1 software that lets you monitor every sensor on the GPU to read temperatures and check voltage regulation. This card also has three large second-generation HBD fans that respond independently to the temperature conditions inside the card reflected by the iCX sensors. These fans will not stop spinning until the temperature is under 55°C to ensure stability. When not under load, the card is cooled passively through the massive heat pipes for silent operation.

The RTX 3080 FTW3 Ultra is shrouded by RGB lighting that can be customized via the Precision X1 software. It also has a red plastic accept strip that highlights the shape of the card and makes it prominent inside a chassis.

Excellent 1440p Gaming With a Touch of RGB 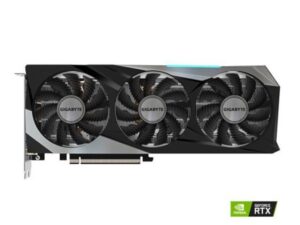 Gigabyte’s GeForce RTX 3070 may not be as capable as the two cards featured above, but it still excels in high-resolution gaming.  It has three fans that conform to the brand’s signature design for optimal cooling.

The RTX 3070 Gaming OC features a compact and stylish design. The fan blades are designed to reduce air turbulence and improve acoustic performance. Meanwhile, the middle fan spins in a different direction to maximize the cooling performance. All three fans use graphene nanolubricant to operate silently and double the ball bearing’s lifespan.

Compared to previous-generation GPUs, the RTX 3070 Gaming OC has more heat pipes in direct contact with the die to improve heat dissipation.

In terms of aesthetics, the RTX 3070 Gaming OC isn’t as flashy as the alternatives featured above since it has only one source of lighting located on the side. Nevertheless, it can be customized with the RGB Fusion 2.0 software to complement the rest of your components.

The RTX 3070 Gaming OC has a switch that lets you toggle between OC mode and Silent mode.  Looking at the back of the card, you will find four ports:

Overall the RTX 3070 Gaming OC performs on-par with the previous-generation flagship but is more efficient.

Price and RGB Features Are Just as Good 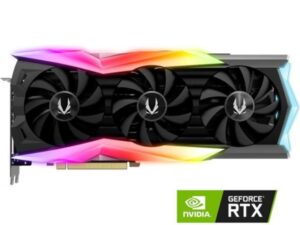 The ZOTAC Gaming GeForce RTX 2080 AMP Extreme comes with features that let it stand out from the rest of the pack, including IceStorm 2.0, Freeze Fan Stop, SPECTRA 2.0 Lighting System, and OC Scanner. It offers excellent value for money if you want to experience smooth 1440p gaming.

The back of the PCB also has ZOTAC’s signature metal backplate that wraps around to the front for fluid aesthetics and stability.

The RTX 2080 AMP Extreme comes with addressable LEDs to give you control over the lighting effects. If the card is not in use, the fan is programmed to stop automatically, saving you power. This feature also allows the card to be silent when not under heavy load, reducing wear and tear on the fans. This card even has a stability system that enables precise temperature gauging and wide temperature tolerance to extend its lifespan. 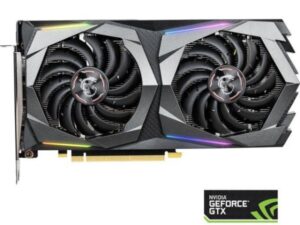 The NVIDIA GeForce GTX 1660 Ti is the first GPU to feature the Turing architecture. It is technically a toned-down version of the RTX 2060, minus the ray tracing and DLSS features.

The MSI GeForce GTX 1660 Ti is packed with features for smooth 1080p gaming and stellar RGB lighting. While it is overclocked out of the box, it can still be pushed beyond its 1875 MHz boost clock with the right adjustments and adequate cooling.

The RGB isn’t as spectacular as some of the cards featured above, but it is enough to add some personality to your gaming rig. Apart from the MSI logo that lights up, there are two LED strips under each fan.

The GTX 1660 Ti has three DisplayPort 1.4 and one HDMI 2.0b port. Even though it doesn’t perform as well as the other alternatives on this list, it is powerful enough to deliver a smooth 1080p gaming experience.

Things To Consider When Buying the Best RGB GPU

Graphics cards are considered the most crucial part of any gaming rig. When looking for a GPU that matches your needs, the abundance of options can be overwhelming. To make sure you pick the right one, here are the most important things you should consider when shopping for the best RGB GPU.

Graphics cards are priced according to their targeted consumers, so it is essential to set a budget range and stick with it. When browsing through an abundance of options on the market, it can be easy to get confused. If you set a budget, you can narrow down your options and choose among the best products you can afford.

After coming up with a budget range, it is crucial to consider the space inside your chassis. Nothing is more frustrating than unboxing a GPU, only to find out that it is an inch too long.

Also, check whether the heat exhausted from the GPU is compromising the rest of the components inside the case.

Knowing your system’s limitations is also an essential factor when shopping for an RGB GPU. You should do the necessary research ahead to avoid issues down the line.

For instance, if you are running an old dual-core processor like Celeron or Pentium, anything on this list is not ideal since it will bottleneck the GPU. Consider checking our CPU for streaming roundup if you are still using an old processor.

Another thing you should consider is your display. All the RGB GPUs on this list are suitable for monitors with resolutions of 1080p or higher. There are displays designed for specific purposes, such as gaming monitors and photo editing monitors, so choosing the right one is just as important as choosing the right GPU.

Only when you pair the right components will you see the full potential of an RGB GPU.

To recap, here are the graphics cards featured in this article:

Which GPU among our list is perfect for your needs? Tell us in the comments section below!