Weeding is one of the most arduous tasks in gardening, even if you ask people with the greenest of thumbs. The task becomes nearly impossible for gardeners who have certain disabilities that come with age, making it physically uncomfortable to perform regularly.

Fortunately, Franklin Robotics has come up with an innovation that will help keep your vegetable and flower gardens weed-free. The Tertill is a household robot that regularly patrols and terminates weeds in your yard. It relies solely on its mechanics, making it one of the most eco-friendly ways to keep your gardens free from herbicides and other chemicals.

Franklin Robotics sent over a review sample of the Tertill, and I am excited to share my thoughts on the product after a few weeks of testing. Long story short, it surpassed all my expectations and delivered on its promise of a weed-free garden with very little human intervention and maintenance. 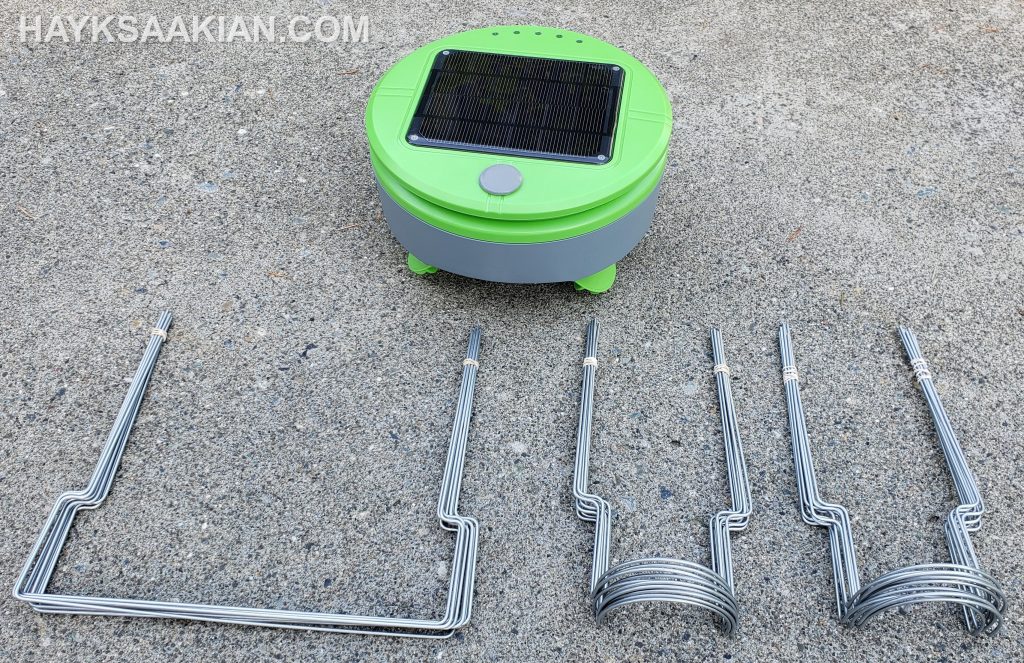 At first glance, the Tertill closely resembles a robot vacuum cleaner with its round shape and wheeled design. However, since it is made for the outdoors, it has a few elements that you usually wouldn’t find in a robot vacuum cleaner. Most noticeably, the device has a large solar panel on top that keeps it charged without any electricity. 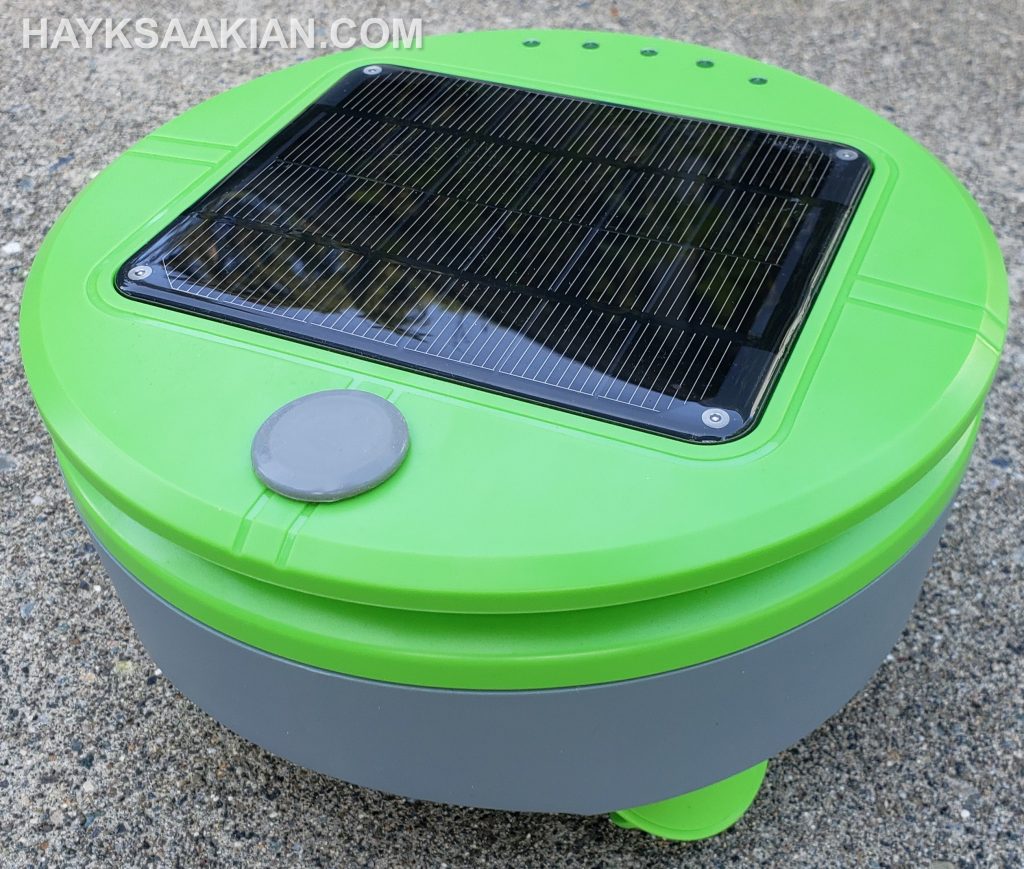 The Tertill is made primarily of polycarbonate that is weatherized to help it withstand any climate. It even cuts weeds more aggressively when the weather is scorching since it is powered by solar energy. On the contrary, the device will patrol less frequently during cloudy or rainy days to conserve a charge. 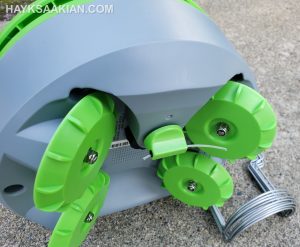 Underneath the Tertill, there are four large cambered wheels that can easily pass through rough terrain and manageable angles. The wheels are angled outward to widen the Tertill’s center of gravity and have its support points more towards the edges. The nylon-string weed whacker, which does the cutting of weeds when engaged, is also situated underneath the device.

If you’re wondering how the Tertill cuts weeds without damaging your plants, it has a hidden capacitive touch panel on the front. The panel is strategically placed at a certain height to distinguish the plants you’re growing from weeds.

The Tertill is guided by software algorithms when canvassing an area. You can even adjust the sensitivity level of its capacitive sensor for better performance during rainy conditions (if you’ve ever tried using your smartphone with wet fingers, you can tell it can be challenging to operate). The moment it comes into contact with a plant, it immediately turns aways and wanders elsewhere in your garden to keep it neat and tidy all season long.

The Tertill can only trim weeds instead of uprooting them, so you may be wondering what benefits it offers. Simply put, weeds that don’t get the chance to establish roots and grow leaves use the stored food in its seeds, meaning they won’t be competing with the plants you’re growing. By continually cutting the weeds in your garden, they will never have the chance to produce their own food, and once they run out of stored nutrients, they will eventually die.

Overall, the design and build quality of the Tertill is exceptional, and I could barely find any loophole with the device. If I were to nitpick flaws in its design, it would be that it can’t climb a steep incline and that it sometimes stops in its tracks when burdened with large rocks and deep holes. In other words, it is best suited for gardening areas with even surfaces, adequate fencing, and the least amount of obstacles.

Right out of the box, without any configuration whatsoever, the Tertill worked surprisingly well. I let it run freely in my small yard, and not once did it falter or cut down the wrong plant accidentally. I took a few pictures of the grass sprouts and other debris that it was able to clear to give you an idea of the capabilities of this robot.

My immediate impression of the Tertill was that it moves around incredibly well and has no trouble recognizing plants it’s supposed to ignore thanks to its capacitive touch panel. There were even times when I thought the device was about to get stuck, but it managed to free itself owing to its large and uniquely designed wheels. For instance, it would run into a relatively deep crevice underneath the house, but it was somehow able to retreat when I thought it was about to get trapped. The only time I had to intervene and pick it up was when it seemed like it was escaping the garden.

I then linked the Tertill to its companion mobile application to see what extra features it has to offer. Initially, I thought the software would allow me to control the device remotely, but it served as a monitoring tool more than anything else since the robot is highly self-sufficient and requires very little human intervention. Nevertheless, I found the application useful in checking the Tertill’s status, including its battery level, how much solar power the panels are generating, and the device’s internal temperature.

The Tertill shipped with row markers and plant collars designed to shield seedlings and smaller plants from being cut down by the robot. These collars can then be removed once the plants grow tall enough to be recognized by the device. As a rule of thumb, shield all the plants that are shorter than half an inch to secure them from the robot. You can also purchase additional markers and collars if the ones shipped with the Tertill are inadequate for your needs. 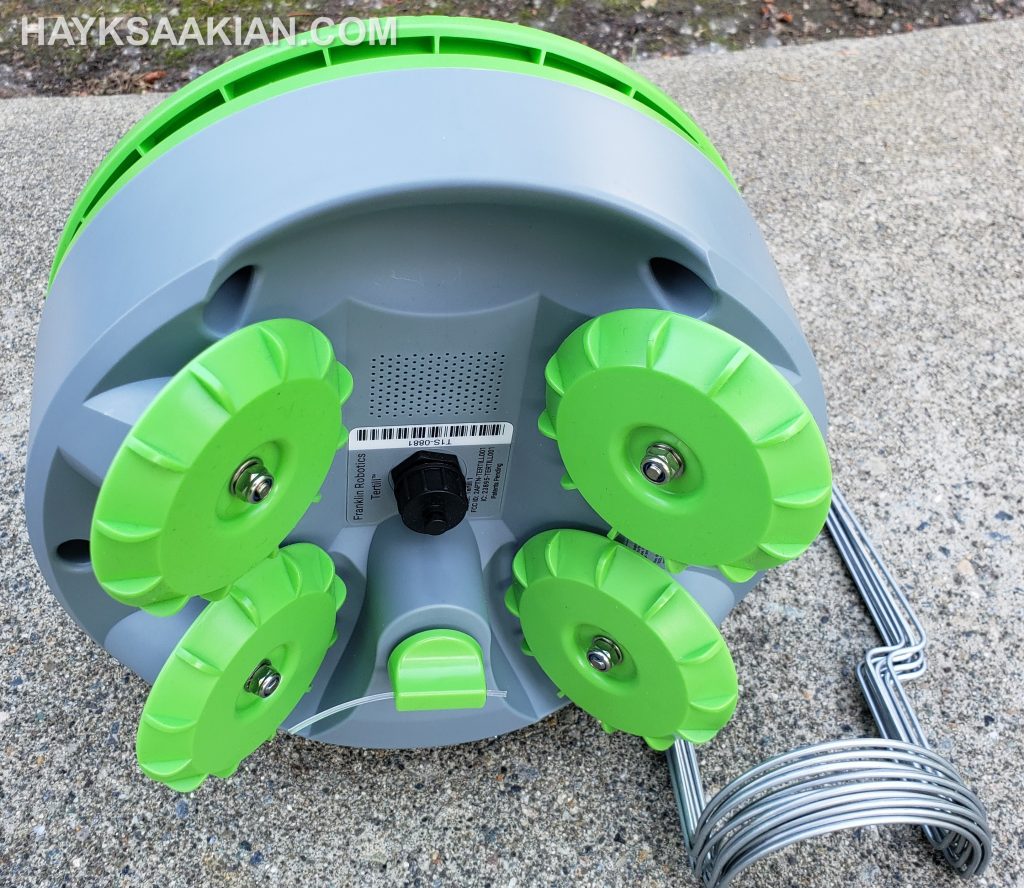 It would be best if you had physical barriers around your garden to keep the Tertill within your desired area. Your plants should also be spaced at least a foot apart, so the robot has enough space to operate. You can still group plants, but make sure there is ample space for the device to roam through.

If your garden doesn’t have fencing, I recommend letting it roam around to see its movement patterns, and then you can place barriers where it tends to escape.

Although the Tertill rarely gets stuck when traversing soil, it would have been nice to have a feature that alerts the user when it gets trapped. They could have integrated this feature into the mobile application as some sort of notification.

In Seattle, the weather changes intermittently, and it took me a couple of weeks to schedule a day when it was sunny so I could take a few pictures and see what was going on more clearly. I haven’t had the chance to see it in action during a rainy day, but I’ll make sure to post an update to see how well it holds up under rough conditions. I expect to behave less aggressively and patrol less often since it won’t be getting as much solar power.

As I’ve mentioned several times throughout this review, the Tertill is fully automated and requires almost no human intervention. Once you place it in your garden, you can forget it’s even there. You never have to worry about charging, and cleaning the robot is necessary only when the wheels have clay stuck on them during rainy seasons.

The nylon-string weed whacker is extremely durable, and I imagine you’d only have to replace it about once every couple of months. Make sure to clear your garden on large rocks to make the string even more long-lasting.

Overall, the Tertill Robot Garden Weeder performs exceptionally well and is easily one of the best household robots you can get today. Franklin Robotics nailed it with this one, and I would recommend it to anyone who is sick of the back pains from having to pluck weeds manually. It is one of the most eco-friendly ways to keep your gardens weed-free and chemical-free.