A digital stylus. Something a lot of digital art and designers have been using since the dawn of their core devices themselves. While the technology for graphic design tablets have been getting better, the stylus has remained unchanged for a long while. That is until iOs and Android devices have started to ingrain graphic design apps on their stores. Then there was a scramble for companies to provide a stylus that can pair with these devices. Hence the Bluetooth stylus was born.

You see, before, a stylus is well, something that comes with the tablet or whatever device you bought. Nowadays, a Bluetooth stylus allows for greater flexibility for graphic design professionals by allowing their work be taken anywhere via their personal mobile devices. And one of the good ones out in the market right now is Scriba.

According to their site:

“Scriba is a radical new stylus for mobile devices that provides an enhanced user experience and greater level of control.” 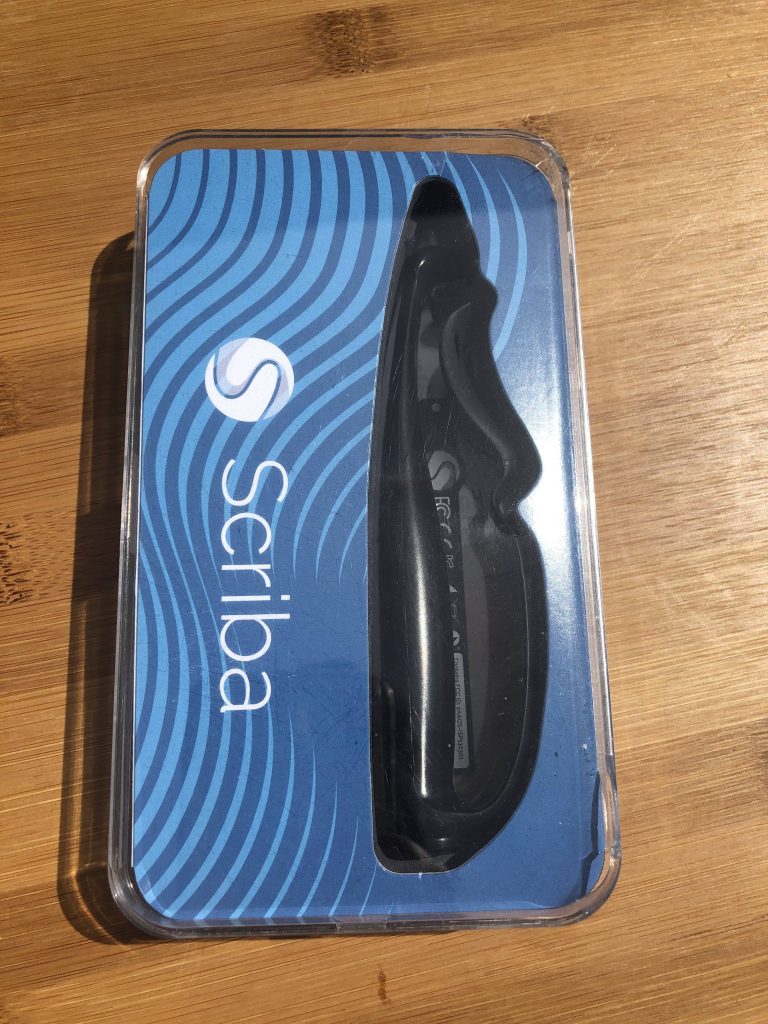 But what does that mean for the average consumer? Well, a lot actually. First and foremost, Scriba is an ergonomic Bluetooth stylus that not only feels right in your hands, but also provide precise control over your activities. It allows for incredibly an incredibly comfortable work flow.

When you order a Scriba package, it comes with the following: 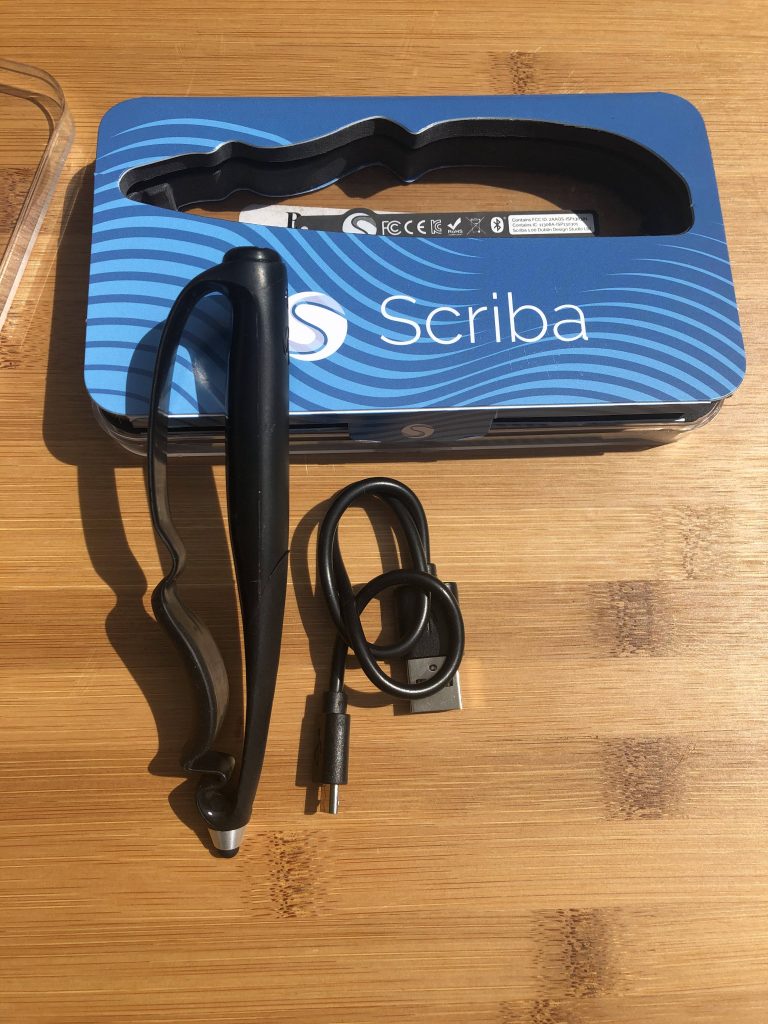 For basic specs, the stylus itself ways around 16 grams, which is average with most Bluetooth stylus. Once fully charged, you can use it for 200 hours, which means uninterrupted working times. Just charge it in the weekends then you are good to go for the week. If you are working on a strict 8 hours a day, 200 hours of work time means you can charge the stylus once a month, and you can work that whole month without worrying about the battery life. It’s that insanely good.

Those big numbers on the operating time also means another thing: the Scriba can be on standby for a whopping 6 months before the battery gets totally drained.

The stylus is charged via a micro-USB charging cable. Not exactly the type-C stuff we are looking for, but it works. This just means you can charge it using other micro-USB cables, like a PS4 cable perhaps, or an Android mobile device charger. Charging the Scriba requires you to remove the base of the pen and inserting the cable there.

Once you take a look at the Scriba, you’ll notice that it’s not the usual pen stylus you are used to seeing. It has an open frame, and the style looks like something used in sci-fi movies. The “barrel” of the Scriba stylus places itself on your thumb line comfortably. Meanwhile, the body of the stylus rests perfectly on your index or “pointer” finger. The points where your fingers meet with the Scriba is aligned with a rubber finish to avoid slips and slides that will ruin your work flow. This adds a bit more security and comfortability when working.

As mentioned earlier, the Scriba stylus features an extremely unique ergonomic design for better grip. This design also allows for its “squeeze motion” technology. Instead of buttons, it is programmed to respond to what actions you want to make by squeezing the part where your index finger is on the stylus itself. This allows for smoother usage for your already delicate hands, although we do admit that it takes getting used to. The motion will be a bit bizarre since you will be squeezing the pen to activate commands, which is something you do not usually encounter. 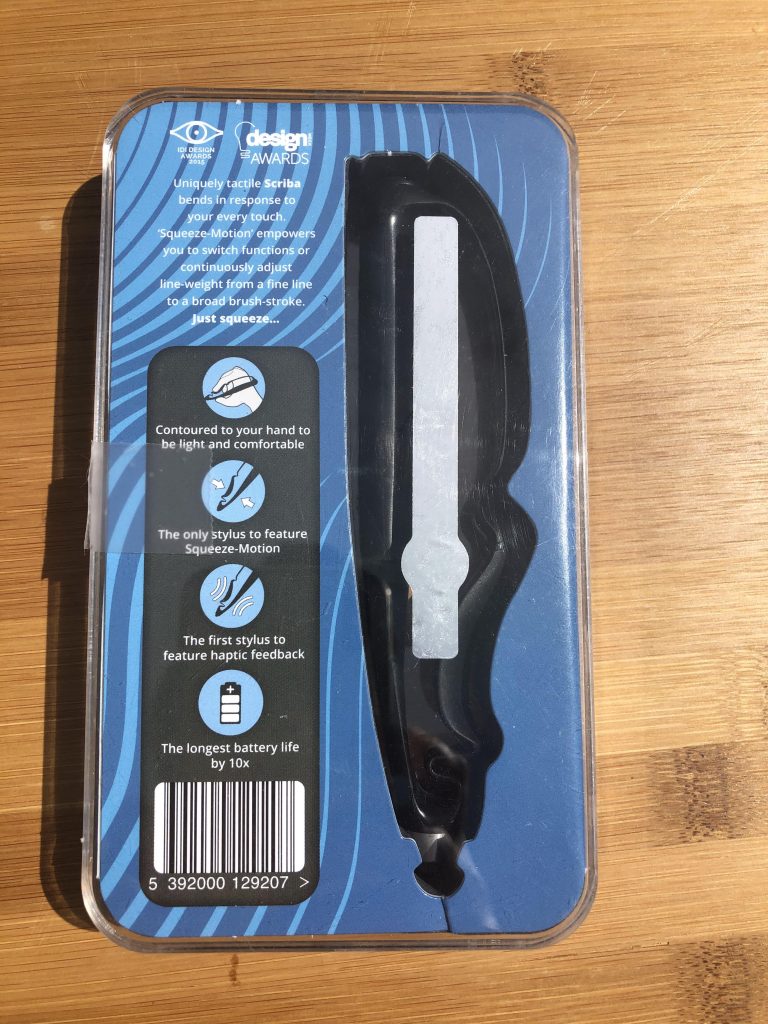 If you are trouble envisioning how this works, then let us give you an example. Imagine holding a tube of toothpaste. If you squeeze lightly, only a few pastes come out, right? And if you squeeze harder, the paste comes out thicker. The Scriba works on almost the same principle. When you are using a supported app, squeezing the stylus determines the overall thickness of the lines made by the draw function. This eliminates the need to adjust lines while making your sketches or designs, and creates an intuitive flow that helps you focus more on your tasks and reduce the delays of switching pen thickness. Also, the lack of actual buttons makes the overall experience much more natural as well.

Speaking of reducing delays from your work, the built-in haptic feedback also helps notify you if you are changing functions in the application. Usually, there is a confirmation screen or a pop-up that will tell you that you are using a certain function inside an app. These switches sometimes eat up time if it covers the screen. Or maybe, you think you switched to something, but it didn’t really push through and you are left with your previous function which you need to erase.

This can get annoying at times, and the only way to move past this is to trudge through it and make sure of everything. Well, the haptic feedback changes all that. Paired with the squeeze-motion feature, whenever you change functions on your pen and app, a small vibration will confirm that the function is retained and is in effect. This might seem to be a small thing, but upon regular use, this is shaves previous time that goes more into your designing. Rather than worrying and rechecking if everything is right, the haptic feedback can help you confirm if things are working perfectly or not. It’s a good “quality of life” feature that is only unique to the Scriba.

The Scriba is quite a good tool that beats a lot of its competitors out in the market. While the Scriba might only be working with a few apps at the moment, the company behind the product is working tirelessly to get permissions from other apps to partner with them.

Overall, we recommend using the Scriba If you are looking for a well-worth investment in a Bluetooth digital stylus. The features, functionality, and comfort is worth your money. You can get the Scriba at GetScriba.com