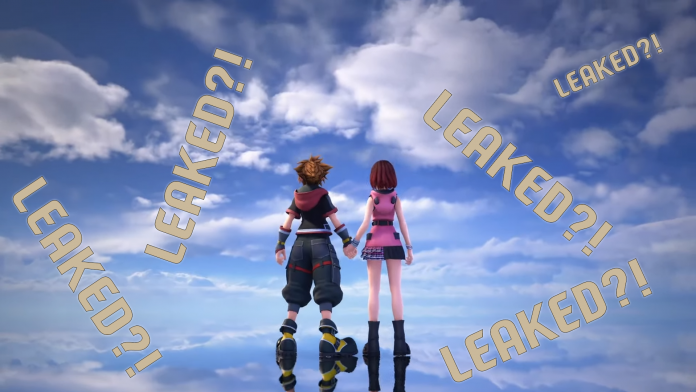 A leaked video of the upcoming Kingdom Hearts 3 ReMind trailer and release date has been the buzz all over the internet. And, as I have seen it personally, all I can ask myself is:

“I have been having these weird thoughts lately, like, is any of this for real… or not?”

Kidding aside, the continuation of the epic, decade-spanning adventure of Sora, Donald, Goofy, and all of their friends will finally continue (and hopefully close) earlier next year. The uploader of the leaked video stated in the comments that the release date for the PS4 will be on January 23, 2020, and February 25, 2020, for the Xbox.

Before anything else, here’s the video. Hopefully, you get to be in time to watch it before it gets taken down by Square-Enix.

ReMind is a massive DLC that continues the story from 2019’s Kingdom Hearts 3. If you haven’t played it but is curious about the game, then you might probably want to check out the Kingdom Hearts 3 for the PS4 and Xbox, both now on sale.

Check the price of Kingdom Hearts 3 for the PlayStation 4

Check the price of Kingdom Hearts 3 for the Xbox One

I am a huge fan of the Kingdom Hearts series, like seriously.

And that is why I’m going to give my personal analysis of what I think will happen according to each part of the trailer. I’ll also be providing some screenshots of exciting scenes in the leaked video.

I won’t be going into the full details of KH 3, because that is an entire post in itself. I am writing this with the mindset that you already know KH lore. Otherwise, you wouldn’t be reading up to here in the first place.

AND FINALLY, MASSIVE SPOILERS AHEAD. You’ve been warned!

Fans were really upset with the release of Kingdom Hearts 3 earlier this year since there were no signs of FF characters anywhere in the game. KH is supposed to be a “what if?” crossover between Disney and Square-Enix characters, so their pleas were definitely justifiable. But director Tetsuya Nomura heard the fans’ cries and made up for it.

As the trailer starts, we immediately cut into a gorgeous outside shot of the main castle on Radiant Garden. If you are not familiar with it, Radiant Garden is the world where all the Final Fantasy characters hale from, at least in Kingdom Hearts lore.

We see Aerith from FF7 talking about the current whereabouts of Sora: 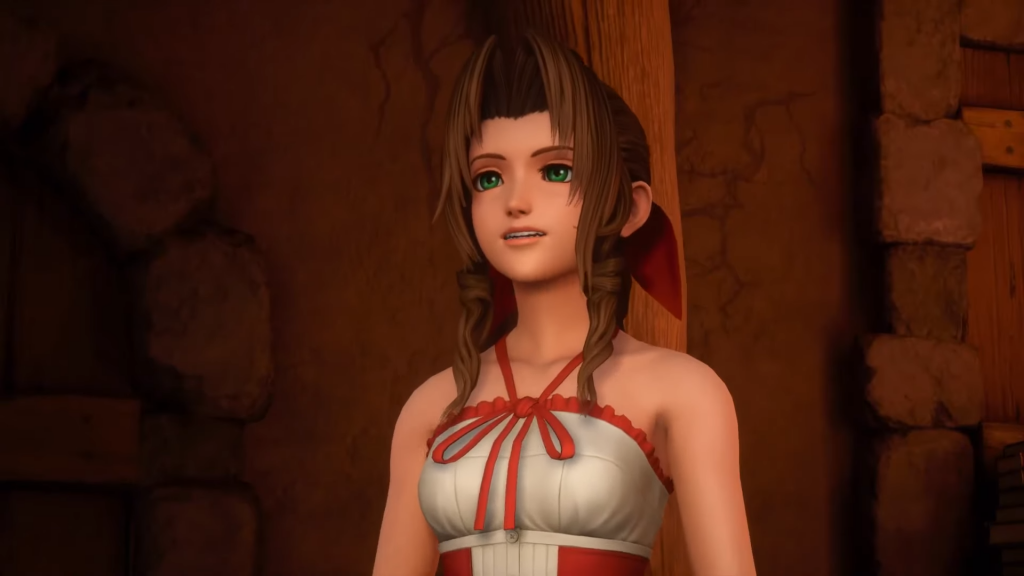 As well as Riku talking to Leon AKA Squall Leonhart of FF8, and Yuffie from FF7. 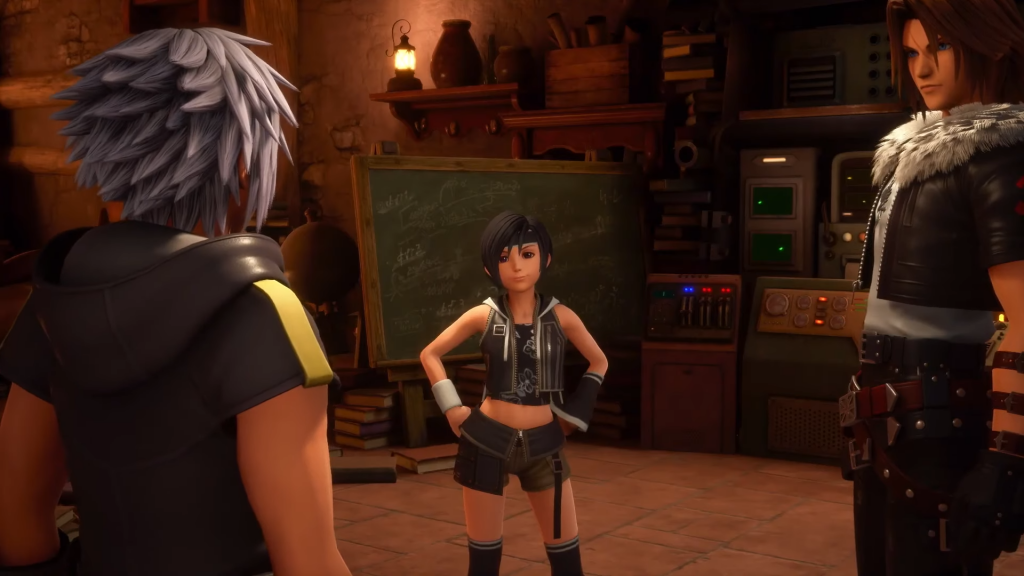 TST: First of all, I am so happy that the Squeenix characters are back. Now then, regarding their conversations. I think Riku went to Radiant Garden to seek Ansem’s help on finding Sora. Since the FF characters have access to the castle, and the data in general, they might help Riku on his endeavor. Weird, though, because he should have just gone to seek Ansem’s help in the first place.

Sadly, besides story related cut scenes, I do not think that we will be able to party up with any of the Square-Enix characters. Its Sora who has bonded with them, and they actually replace either Donald or Goofy on the character slots. I really hope I’m wrong, though.

Another scene we see on the trailer are Terra-Xehanort and lots of Anti-Aqua clones. In the scene with the clones, it seems that Sora is trying to put himself in Aqua’s shoes on how she was consumed by the darkness. The next scene shows himself still in Keyblade Graveyard, being attacked by Terra-Xehanort. 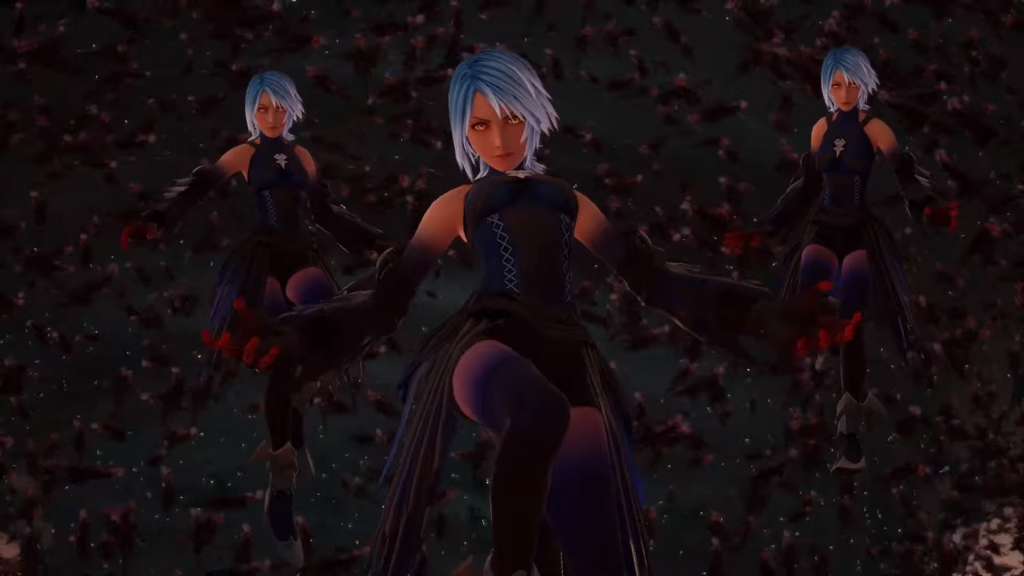 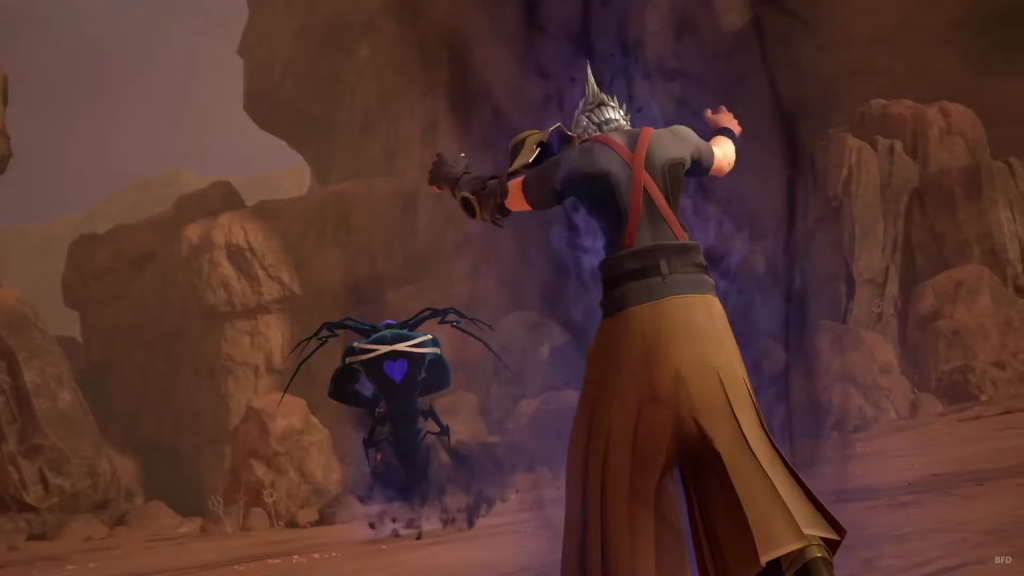 TST: One key factor in understanding Sora’s journey is that he is very susceptible to being corrupted by the darkness. This can be confirmed in Kingdom Hearts: Dream Drop Distance. Here in ReMind, he seems to want to understand that part of himself or something, and he ended up in Keyblade Graveyard to possibly see how Aqua and Terra were when they were dancing with darkness themselves.

The next scene is an action/gameplay scene where we look at a sort of an event where we can play as the Guardians of Light. Riku, Axel, Shion, Roxas, Terra, Aqua, Ventus, and King Mickey were shown to be fighting what seems to be clones of Master Xehanort. It is very fast-paced, so pardon this blurry image. 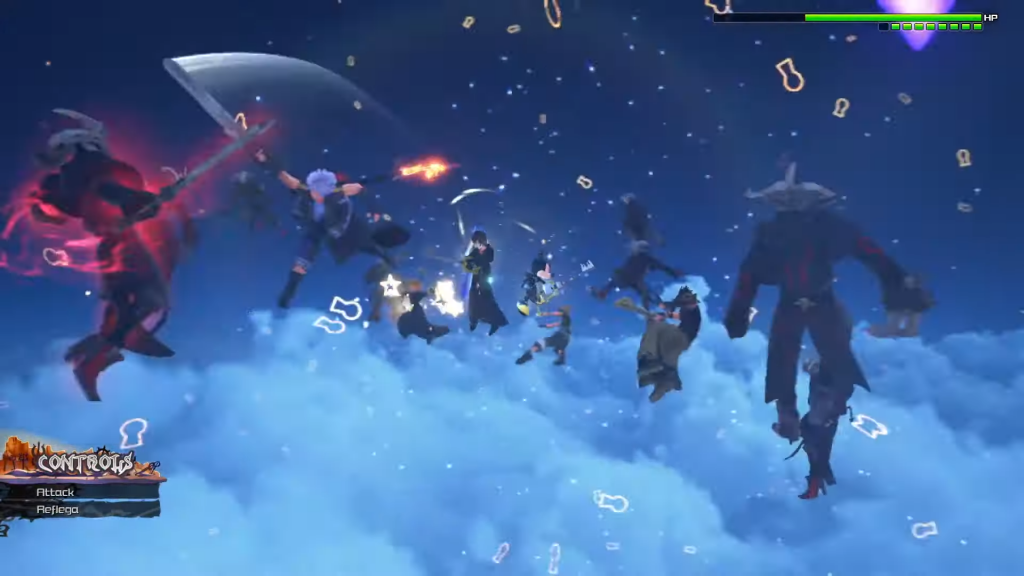 TST: This is a bit tricky, as the ending of Kingdom Hearts 3 shown Sora defeating Master Xehanort already. I don’t know if this is a training of some sort or if the Guardians of Light – and friends – will be facing the darkness in the form of one of the strongest Keyblade Master known to them. They are being overwhelmed on the video, though, so it might be a crucial battle that spells trouble if they fail, but we’ll see.

The Trouble within the Organization XIII

Luxord seems to be confronting Xigbar regarding the enigmatic “box” here in the next scene. Xigbar, who was revealed to be Luxu, one of the original disciples of the Master of Masters. He is also a member of the Organization XIII, but it seems that the members are out to get him. 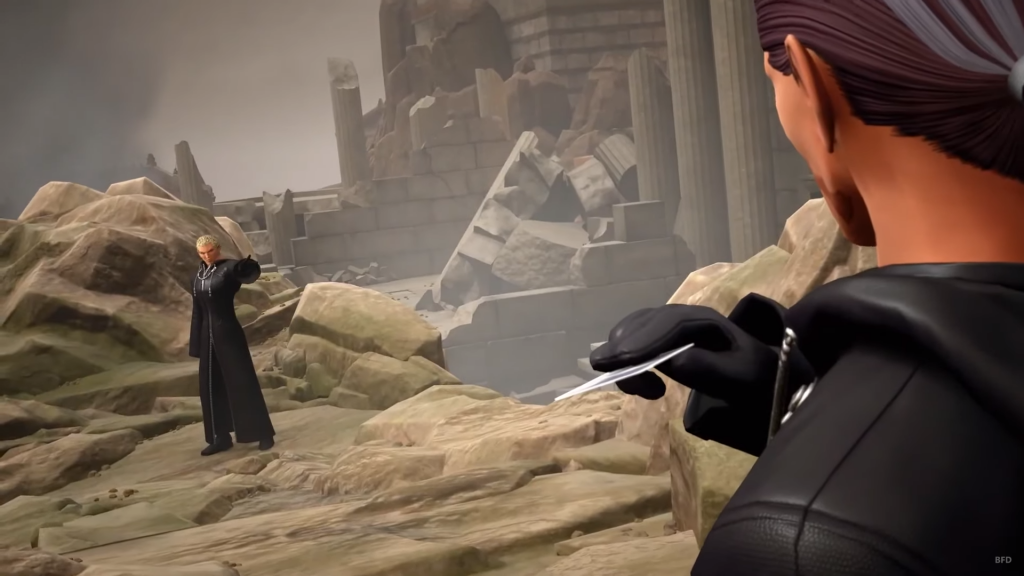 Speaking of members, remember this guy? 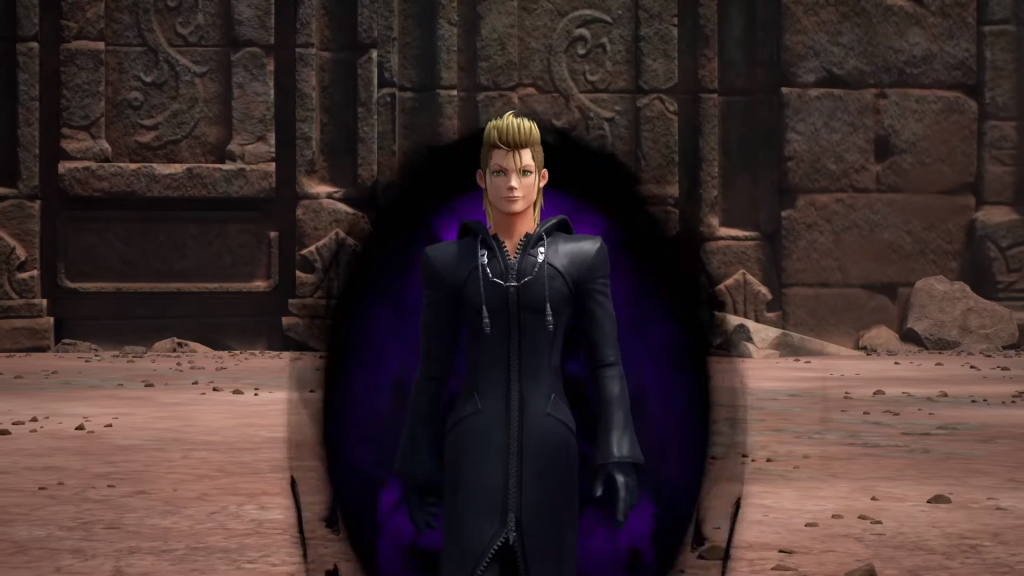 Yeah, he’s back. As well as the other Organization XIII peeps. I personally think there’s some kind of game mode like the data gauntlet thing from KH2 Final Mix, where the OXIII members are involved. Or maybe it still has something to do with Sora’s journey. I really have no idea on this one, it’s just that it’s incredible that we get to relive those fights. 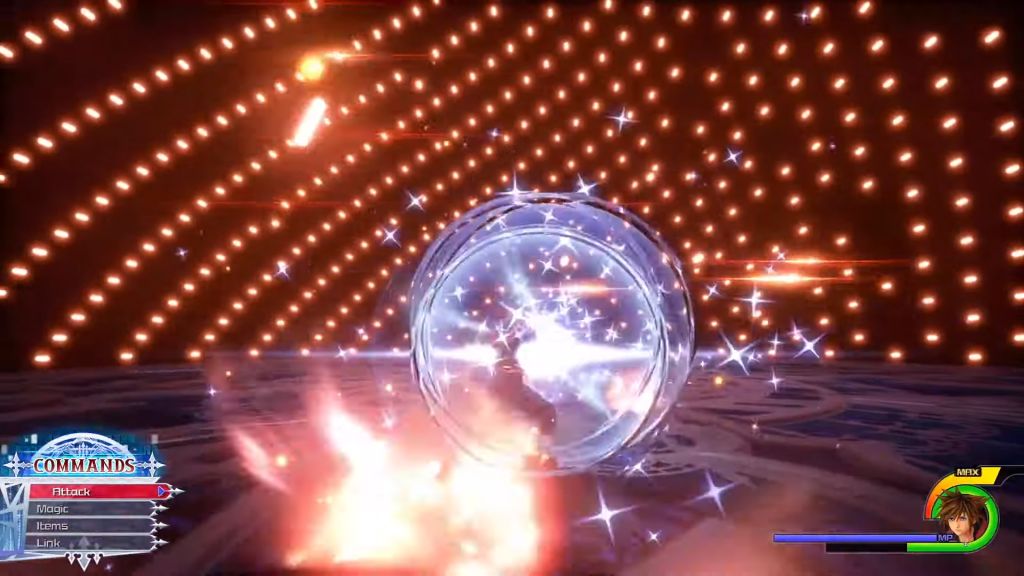 Kairi and Sora in The Final World

This actually gave me goosebumps, since I really like the aesthetic of this world.

After some more scenes with Sora and more Dive to Hearts glass, the scene after those has him and Kairi holding hands in what seems to be The Final World. I have no idea how they got there, but here they are. Again this might be related to Sora’s journey of reconnecting everything to find Kairi, and this is where he found her? Maybe. 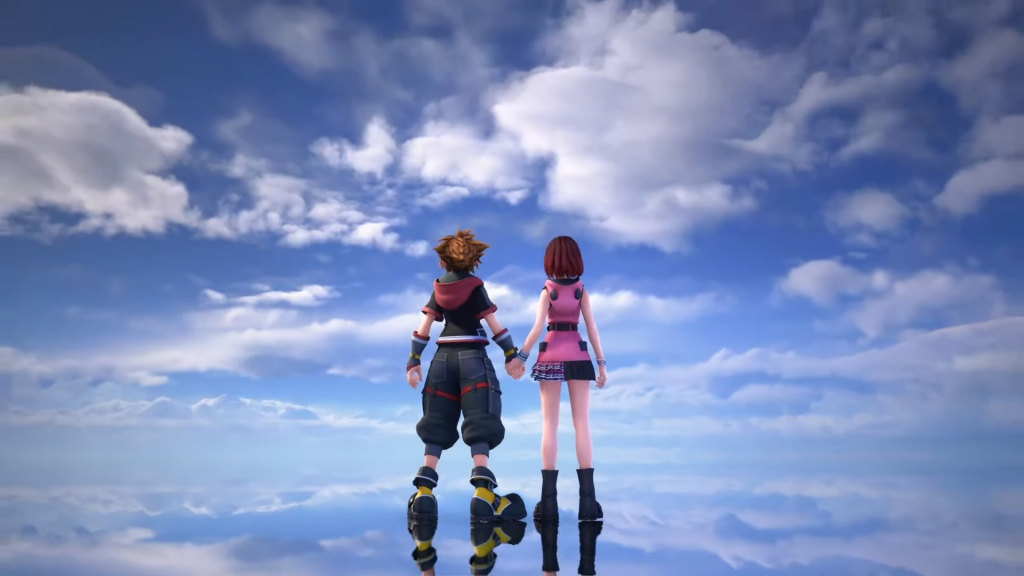 Oh yeah, KAIRI IS PLAYABLE! There’s an action sequence here where Kairi is seen to be playable, with Sora as his support character. 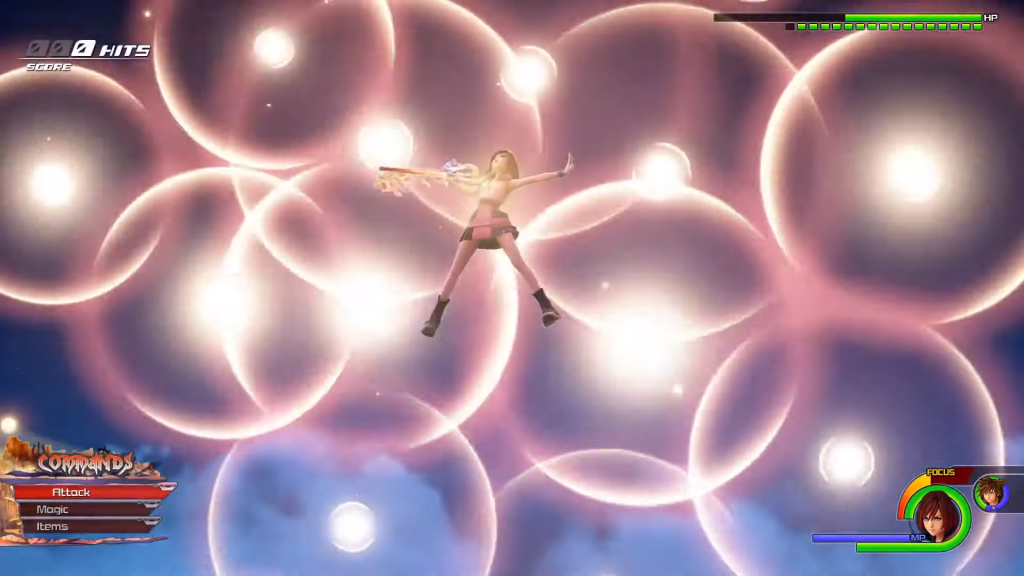 TST: Sora might have lost his powers at this point; hence, Kairi is fighting for him. It might have been the result of exhausting his Power of Waking just to look for Kairi here in The Final World. I am now interested if ReMind is a DLC of just what happened before the famous “Thanos Snap” of Sora in KH3’s ending movie.

After the Kairi fights, there are more scenes with the regular cast of Kingdom Hearts, namely with the Sea Salt Trio, Riku, and Aqua. I do not want to post them here since they are heavily conversational, and it will lose its value in screenshots.

What I want to talk about though, is this guy: 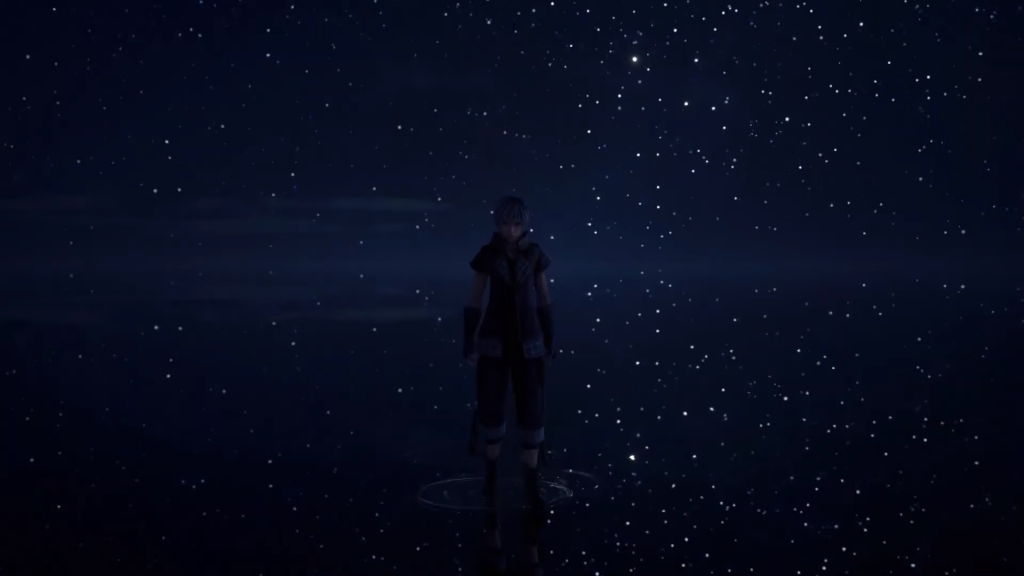 The final scene is Sora still inside The Final World, yet he met with someone I definitely did not expect to be there. It seems to be Yozora, from the Verum Rex game inside the Toy Box world. To confirm my speculation, I examined an image of Yozora from Kingdom Hearts 3, one where a full shot of his clothes is shown. 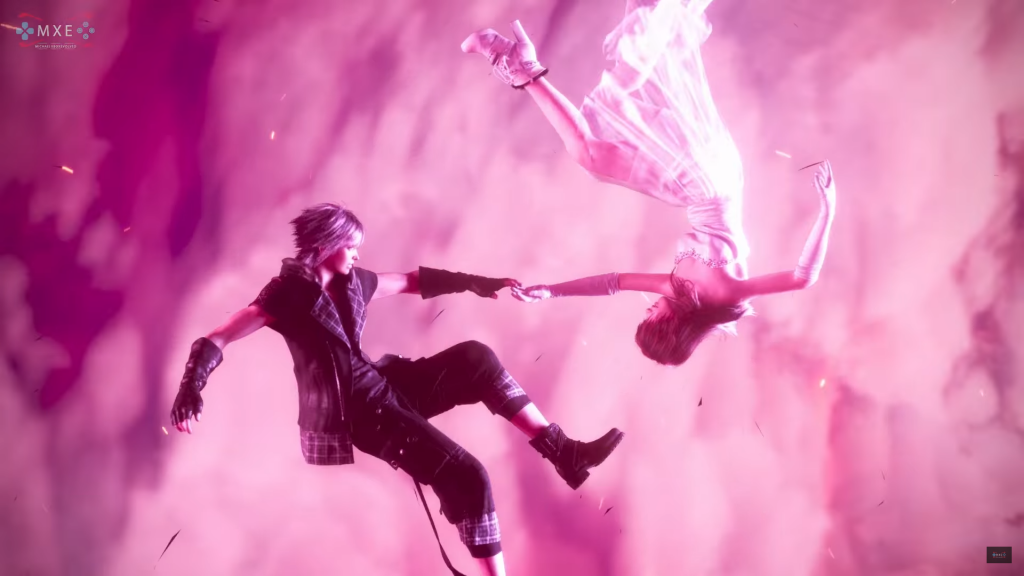 As you can see, the outfit design is the same as the figure in the screenshot above. The dangling tassels on his shorts are also there, seen in both screenshots.

For a better look at Yozora’s outfit design, here’s another screenshot from KH3 with him sitting. You can compare it, and you can tell that it looks exactly the same. 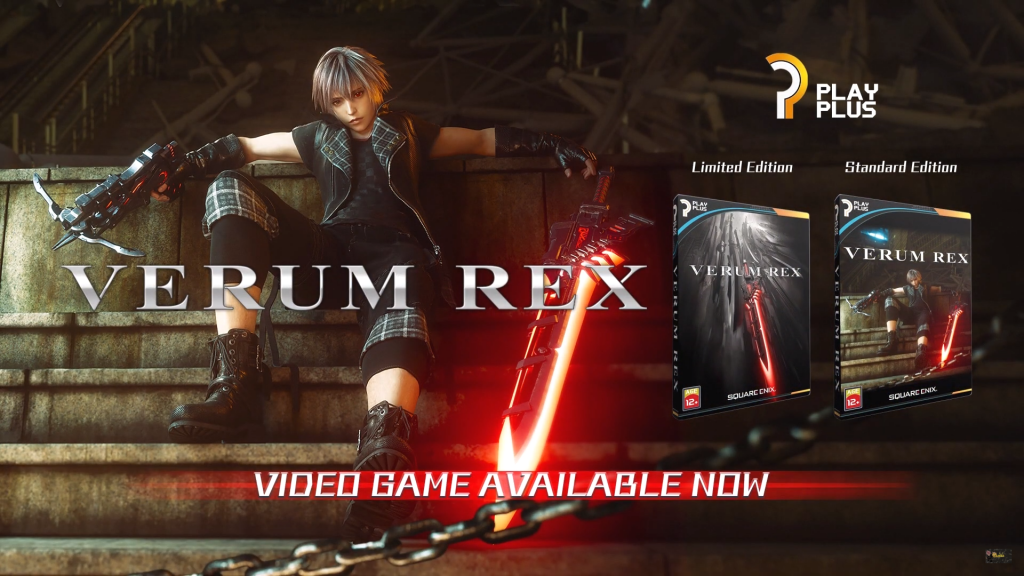 TST: It seems that Sora and Yozora has a connection. In the final phases of the leaked trailer, they both spoke the same lines that Sora once said on the opening of the very first Kingdom Hearts game. I have no idea if Yozora is another Sora persona out there, but they have very distinct connections. And I think even their outfits are almost the same, albeit with different color schemes. This is really the most mysterious thing in all of the scenes in the trailer.

So What is Next for Kingdom Hearts?

Personally, I feel that Kingdom Hearts 3 ReMind will just be the first DLC for KH3. It does not seem to be the whole thing, and only shows Sora’s journey in finding Kairi. It doesn’t matter to me, though, since I want to know more facts about the game’s lore.

We just have to wait until ReMind gets released. And until then, may our hearts be our guiding key. 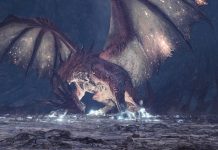 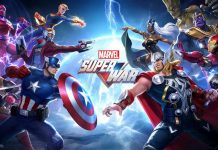 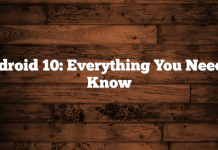 Android 10: Everything You Need to Know