The Creative Sound Blaster G3 is an external USB DAC that adds a host of audio features to your set of headphones. It is fully compatible with multiple platforms, including PC, Mac, PlayStation 4 (PS4), and Nintendo Switch to substantially enhance your gaming experience. 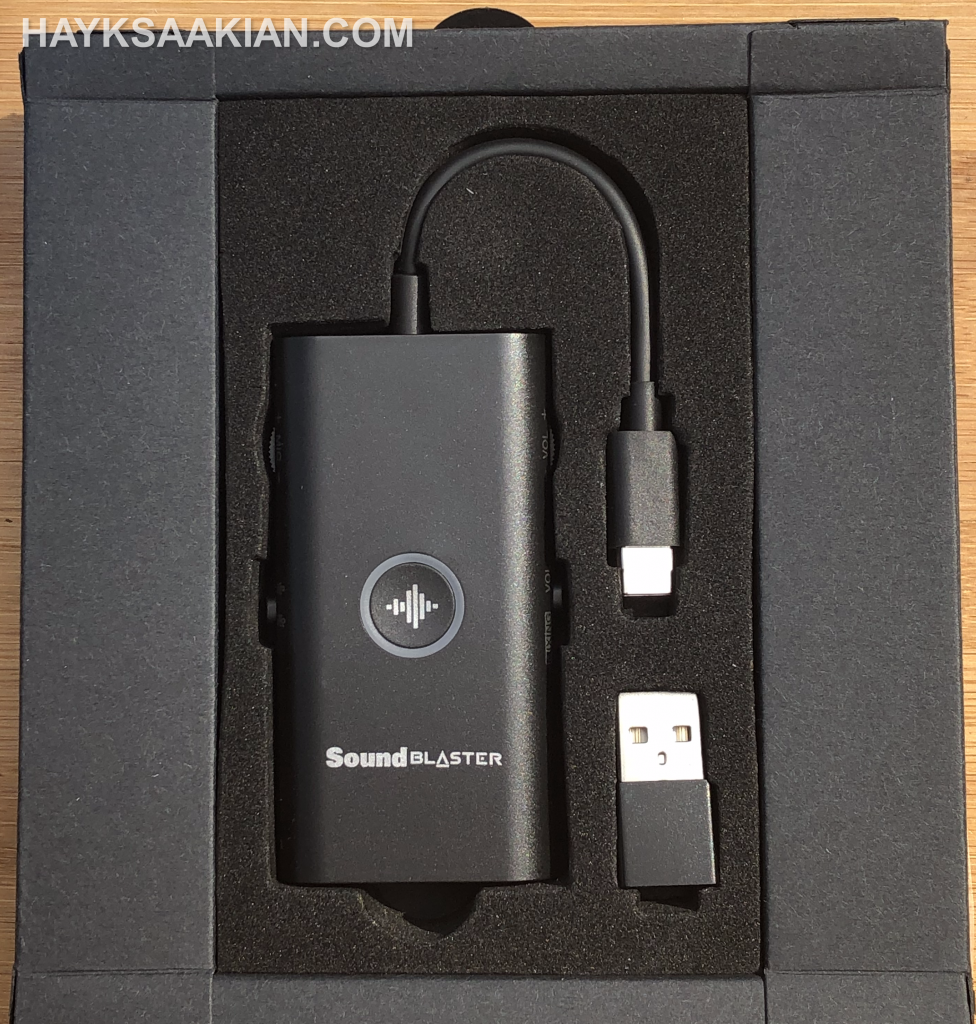 Creative recently sent over a review sample of the Sound Blaster G3, and I am eager to share my thoughts on the product to help you determine whether it is a worthy investment for your gaming setup. 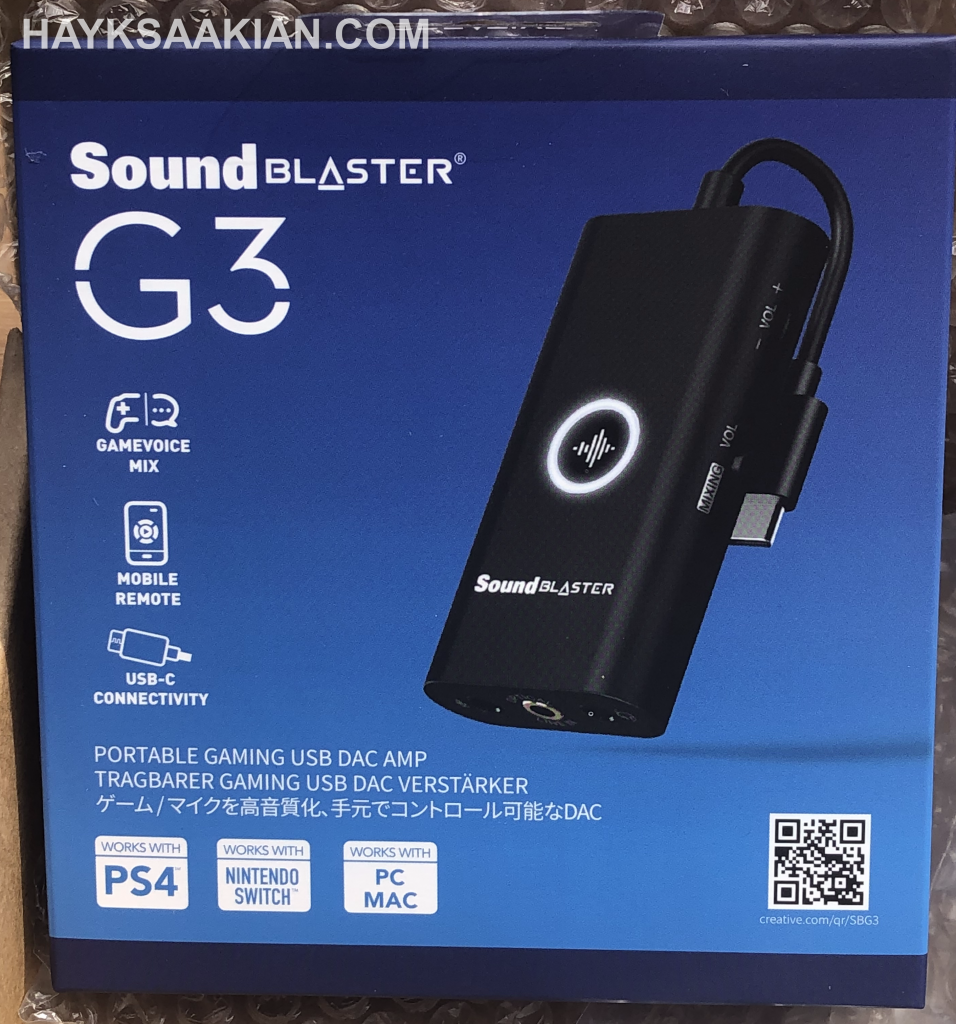 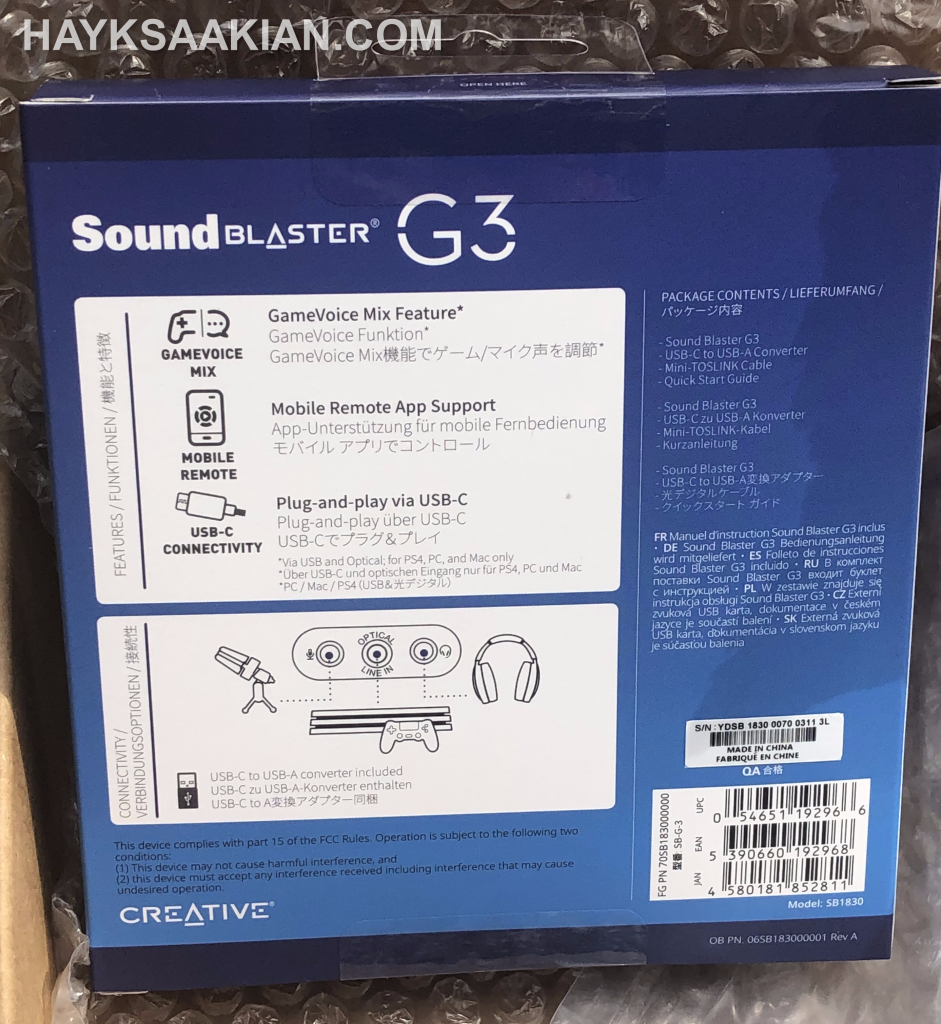 The Sound Blaster G3 is more budget-oriented. The device, including all the buttons and knobs, is made entirely of plastic. Nevertheless, this design works in favor of portability, and its small parts don’t feel tacky at all.

Most of the control buttons of the Sound Blaster G3 are positioned on either side of the device. These include the microphone volume wheel, game balance wheel, microphone mute toggle, and mixing/volume toggle. In the middle of the device, you will find the Footstep Enhancer button, which glows white when enabled. Towards the bottom is where the three audio interface slots are located. 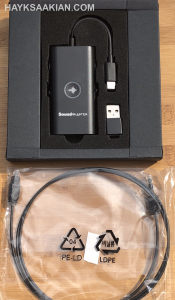 The main selling point of the Sound Blaster G3 is its ability to give you customizability options on the fly without using any complicated software applications. This plug-and-play functionality allows for seamless use across multiple platforms. You won’t have to worry about downloading drivers either, as it works straight out of the box.

Although I thoroughly enjoyed the Sound Blaster G3 without tweaking its software, I adjusted some audio settings to make this review even more comprehensive. The audio mixer is truly a valuable feature for those who want to customize the sound to their preferences.

If you’re playing an online multiplayer and want more precise communication between you and your teammates, the mixer gives you the ability to lower the volume of other audio sources in-game.

I tried the Sound Blaster G3 using different headphones, and the results never failed to impress me. It managed to improve the audio experiences and met my high expectations every single time.

The Sound Blaster G3 connects to a PS4 using either the USB Type-C to Type-A converter cable or the Mini TOSLINK optical cable. I found the converter cable to be a slight annoyance, considering that this device is marketed for the PS4. Nevertheless, I preferred the optical connection since I found it to provide the more noticeable audio enhancement over standard stereo output.

The Sound Blaster G3 can also attach directly to a Nintendo Switch without adapter cables through the USB Type-C charging port.

It is worth pointing out that the Sound Blaster G3 also supports audio playback for the Xbox One via the Mini TOSLINK optical jack, but it doesn’t support voice communication. That means Xbox users might want to pass up on this device if voice chat is essential.

Since the Sound Blaster G3 is marketed as a console gaming peripheral, I decided to test it out with a few of my favorite games. While playing first-person shooters and battle royale games, I found the Footprint Enhancer feature extremely useful when I was camping as a sniper. When enabled, this feature boosts treble noises, such as footprints from incoming enemies, to give you a better sense of positioning.

Aside from the Footprint Enhancer feature, the Sound Blaster G3 enhances overall in-game audio to improve your gaming experience. Gunshot sounds are more explosive, the dialogue is much clearer, and even the background music in menus sounds better.

The Sound Blaster Central mobile application allows you to adjust the equalizer, set audio profiles, and control volume levels remotely through your Android or iOS device. Using the application, I was able to control the microphone output level, which made in-game communication clearer and more effective. I was even able to change the audio output from my headphones to my desktop speakers through the application.

When it comes to equalizer customization, Sound Blaster Central has an intuitive interface that is easy to comprehend and introduces you to a bunch of presets like music, movies, and gaming. It also has presets designed for specific games, such as Call of Duty, Counter-Strike: Global Offensive, Fortnite, and Overwatch.

Sound Blaster Central provides recording customization options so you can adjust monitoring volumes if you want more control over your headset microphone. On top of all these, the application also gives you extra audio features like virtual surround virtualization, crystalizer, smart volume, and dialogue enhancement.

If you want to experience high-end audio without the accompanying high price tag, the Sound Blaster G3 offers an incredible deal. It elevates your existing headphones and turns it into a feature-rich audio solution.

Although the Sound Blaster G3 is primarily designed for consoles, it works surprisingly well with computers, and can even replace some of the mediocre onboard audio of some motherboards.

Something to consider about the Sound Blaster G3 is future compatibility. While it is an excellent companion to the PS4, the PS5 is only a few months away. The question thus becomes: will it work on the next generation of gaming consoles?

Overall, the Sound Blaster G3 is a handy audio device that is an excellent investment if you own multiple gaming consoles and a pair of wired headphones.