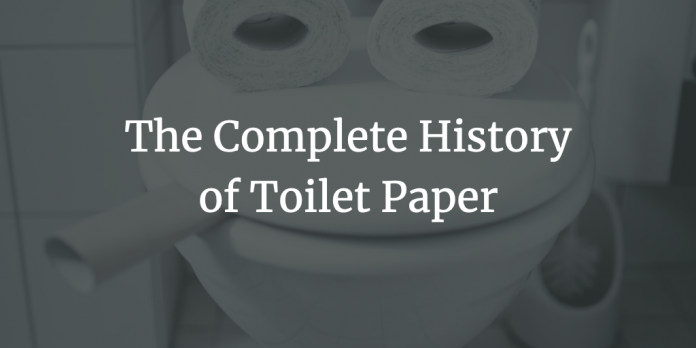 Like portable toilets, toilet paper (or toilet tissue if you prefer), is rarely the main topic of discussion at formal dinner parties. However, it’s amazing how often we get some variation of the questions, “When was toilet paper invented?”, “Who invented toilet paper?“, and “What did people use before toilet paper was invented?” Here are a few of the highlights in the evolution of toilet paper that we’ve compiled from various sources.

What did people use before toilet paper was invented?

Well, just use your imagination: grass, leaves, fur, mussel shells, corncobs, stinging nettles… okay, maybe not that last, at least not more than once. The ancient Greeks used stones and pieces of clay; ancient Romans used sponges on the ends of sticks, kept in jugs filled with salty water. Mid-Easterners commonly used the left hand, which is supposedly still considered unclean in the Arabian region. Corncobs and pages torn from newspapers and magazines were commonly used in the early American West. The Sears catalogue was well-known in this context, and even produced such humorous spin-offs as the “Rears and Sorebutt” catalogue. The Farmer’s Almanac had a hole in it so it could be hung on a hook and the pages torn off easily. Below is a more detailed list:

What is a Gompf Stick?

A “Gompf Stick” is a stick with a sponge on one end that has been soaked with salt water. Gompf sticks are used to clean up after pooping. They are a pre-cursor to bidets and toilet paper.

When Did Toilet Tissue Get Created?

“Official” toilet paper – that is, paper which was produced specifically for the purpose – dates back at least to the late 14th Century, China, AD 1391 is when the Bureau of Imperial Supplies began producing 720,000 sheets of 2 ft. x 3 ft. sheets of toilet paper a year for use by Emperors.

Joseph C. Gayetty of New York started producing the first packaged toilet paper in the U.S. They made toilet paper starting in 1857. It consisted of pre-moistened flat sheets medicated with aloe and was named “Gayetty’s Medicated Paper”. Gayetty’s name was printed on every sheet.

Rolled and perforated tissue paper as we’re familiar with today was invented around 1880. Faced with the consumers’ resistance toward the “unmentionable” product, Scott came up with the idea of customizing rolls for every merchant-customer they had. Under this private-label arrangement, Scott purchased large “jumbo” rolls of paper from various paper mills and converted them into packages of small rolls and stacked sheets. (*Great Britain…1880- British Perforated Paper Company) Scott Company was too embarrassed to put their name on their product, as the concept of toilet paper was a sensitive subject at the time, so they customized it for their customers… hence the Waldorf Hotel became a big name in toilet paper.

In 1935, Northern Tissue advertised “splinter-free” toilet paper. Yep, you read that right; early paper production techniques sometimes left splinters embedded in the paper. And you thought you had it tough! In 1942, St. Andrew’s Paper Mill in Great Britain introduced two-ply toilet paper. For most of the rest of the twentieth century, both “hard” and “soft” paper was common. Hard was cheaper, and was shiny on one side. Sometimes it had messages like “GOVERNMENT PROPERTY”, “IZAL MEDICATED” or “NOW WASH YOUR HANDS PLEASE” written on each sheet near the perforation. Eventually soft paper won out as the price differential between the two papers vanished.

And leave it to Johnny… Johnny Carson, one of America’s most loved comedians to cause toilet paper hysteria and a toilet paper shortage in the U.S. in December 1973 after one of Carson’s jokes scared consumers into stockpiling supplies. His writers had heard earlier in the day about a Wisconsin congressman named Harold Froehlich. Froelich claimed that the federal government was falling behind in getting bids to supply toilet paper and that “The United States may face a serious shortage of toilet tissue within a few months”.

His writers decided to include a joke based on this quote in Carson’s monologue. He said “You know what’s disappearing from the supermarket shelves? Toilet paper… There’s an acute shortage of toilet paper in the United States.”

Too bad they couldn’t see the consequence of this statement. You may not be aware if you are young, but the early 1970‘s was a time of serious shortages – oil in particular. The next morning, many of the 20 million television viewers ran to the supermarket and bought all the toilet paper they could find. By noon, most of the stores were out of stock! Stores tried to ration the stuff, but they couldn’t keep up with demand.

Johnny Carson went on the air several nights later and explained that there was no shortage and apologized for scaring the public. Unfortunately, people saw all the empty shelves in the stores, so the stampede continued.

Scott Paper showed video of their plants in full production to the public and asked them to stay calm – there was no shortage. The video was of little help. The panic fed itself and continued.

They finally got the shelves restocked three weeks later and the shortage was over. It is the only time in American history that the consumer actually created a major shortage (I don’t think that the “shortage” of Barbie or Power Ranger dolls at Christmas time could be classified as a real shortage!). And to think that it all started as a joke.

And of course, you’ll want to know The Virtual Toilet Paper Museum opened its virtual doors in 1999. While the Whole World Toilet Paper solves its museum mission by the nature of being a “Virtual” museum, the Madison Museum of Bathroom Tissue (MMBT) had occupied a very real space in Madison Wisconsin from 1992 until 2000. And they’ve obviously been having fun doing it too. With over 2500 rolls of toilet paper, they’re arguably one of the largest collections. In fact the Milwaukee Journal-Sentinel proclaimed, “They had more rolls than a bakery.” How can you beat that? The MMBT was looking for a new permanent home last we heard. Unfortunately we have not been able to find them. Our biggest fear is that they got desperate and (gasp – NO) and used them. 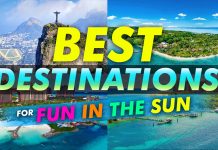 What are the best ☀️☀️☀️☀️☀️ vacation destinations for fun in the ☀️?

Best Earbuds Under 30$: For the Budget Conscious Audio Lovers