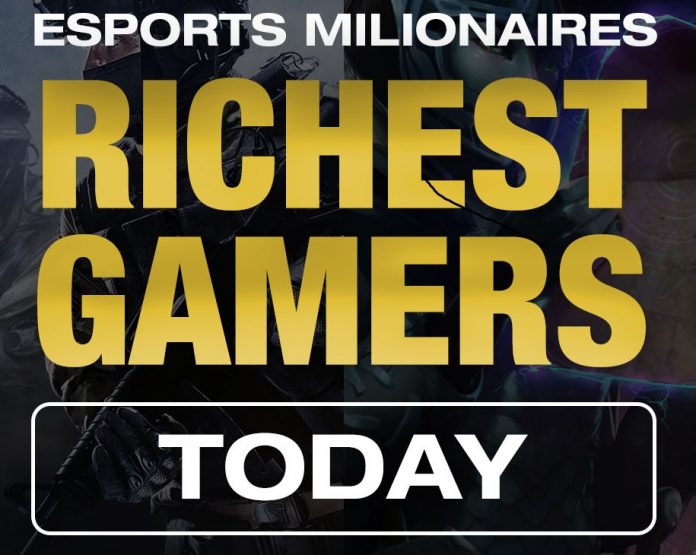 Can you earn money while playing your favorite video game? How about earning millions and making a career out it? If you think that is impossible, then think again. These players have proven that you can earn decent while having the time of your life. Here are the top players who are literally raking millions while playing video games!

Text version for people with disabilities:

Before being the most decorated Dota 2 player with 4 Major and 2 International trophies, N0tail was one of the youngest professional Heroes of Newerth player in the world. In his Dota 2 career, N0tail primary role was to support and was well known in using heroes Chen and Wisp. He is also the first player to win six Valve sponsored events. He currently holds the highest tournament earnings in Dota 2 and esports.

JerAx started his esports career in Heroes of Newerth and played for several teams. He became inactive as he did compulsory military service in the Finnish navy. After that started playing Dota 2 and was Known for his Earth Spirit with over 500 matches played with a 75.5% win rate. JerAx was also the first player to make 4 consecutive Major finals. On August 25, 2019, he became the first two-time TI-Winner, after winning two consecutive TIs, TI8 and TI9.

ana started playing Dota in Australia, though he later decided to move from Melbourne to Shanghai in 2015 to become a professional Dota player. He won his first-ever tournament with OG at Elimination Mode Season 2 and later succeeded in his first-ever Valve and premier event by defeating Ad Finem 3-1 in the grand finals of The Boston Major.

Ceb (formerly known as 7ckngMad) is a French professional Dota 2 that is currently playing for OG. He is also the first and only French player to win The International. After being an analyst at the Shanghai Major, Ceb transitioned as OG’s coach and helped the team to dominate and succeed at the Frankfurt, Manila, Boston and Kiev Majors.

Psalm is a player for Counter Logic Gaming and a former Heroes of the Storm professional player. Aside from his professional career, he is also streaming on Twitch.tv regularly. Out of the 37 tournaments that psalm had competed in, the largest amount was $1,800,000.00 from Fortnite World Cup Finals 2019 – Solo on July 28, 2019. His 2nd place finish makes up 92.48% of his total prize money won.

Aquav2 is a professional Fortnite player for Cooler Esport. He is currently the reigning Fortnite World Cup Duo Champion 2019. He won this competition with Nyhrox for $1,500,000. Aquav2 is also a content creator on YouTube with over 80,000 loyal subscribers. Aside from this, he can also be found streaming on Twitch.tv.

Xyp9x is a Danish professional Counter-Strike: Global Offensive player. He currently plays as Support for Astralis. Xyp9x holds the record for most 1vX wins in a single tournament, he achieved this achievement at IEM Katowice 2017. He is also a founding board member of the Counter-Strike Professional Players’ Association (CSPPA).

Dupreeh is presently playing for Astralis as an entry fragger which he returns to after being the team’s lurker for 2017. He was ranked as the 5th best player of 2018 according to HLTV.org. He was also named as the MVP of ESL Pro League Season 7 – Finals by the same organization. dupreeh also won the greatest number of Majors tied with his teammates’ device, Xyp9x, and gla1ve, with four at ELEAGUE Major and StarLadder Major: Berlin 2019.

Esports player dev1ce formerly known as device and devve is a Danish professional Counter-Strike: Global Offensive player and previous Counter-Strike: Source player. At present, he is playing for Astralis as an AWPer. He also broke the record for most HLTV MVPs in a single year, surpassing GeT_RiGhT, by claiming his 7th MVP Award at the ECS Season 6 Finals on November 25 of 2018.

Faker is probably the most famous Korean League of Legends. Nicknamed as the “Unkillable Demon King”. He is also the first player who reach 1000 Kills in the LCK. Faker is also one of four players to have successfully defended their World Championship and one of the two people who have won the World Championship three times.

Duke or previously known as Leopard is a Top Laner for Invictus Gaming. He is the only player to win the World Championship with two different organizations, first in Korea with SK Telecom T1 in 2016 and China with Invictus Gaming in 2018. He is also the Regular Season MVP of SBENU Champions Spring 2015 with 1000 MVP points.

Wolf Jae-wan began his competitive career on December 21, 2012, when he joined NaJin Shield as their new Support. His in-game name in HOT6iX Champions Summer 2013 was “a Wolf” but was later changed to simply “Wolf.” After the 2017 Season World Championship Wolf was one of four players to have defended their World Championship successfully.

Miracle- is currently playing for Team Liquid. His signature Hero picks is Invoker, Anti-Mage, Arc Warden. On May 11th, 2016, Miracle- made history as the first player in Dota 2 to accomplish a matchmaking rating of over 9000. That same year he also won the eSports Rookie of the Year 2016 by the eSports Industry Awards.

MinD_ContRoL’s professional esports career started with Vast Cast, back in February of 2014. Currently, he plays for Team Liquid’s Dota 2 team. He is known for amazing performances in Heroes like Faceless Void, Beastmaster and Dark Seer. Today MinD_ContRoL play style is an indispensable role in Liquid’s achievements over the last few years.

FalleN currently plays the roles of an AWPer and in-game leader for the Brazillian CS: GO team MiBR. Back in 2015, he was voted as the most influential person in Brazilian eSports. He is also the owner of Brazilian esports organization Games Academy. In 2016, he was Awarded as eSports Personality of the Year by eSports Industry Awards.

Bang is the Bot Laner for 100 Thieves and also plays for 100 Thieves Academy. During the 2015 Season World Championship, he scored a 73 cumulative KDA from the start of the tournament until partway through SKT’s first game against AHQ in which he only died once in the group stage. His KDA streak was cut by AHQ support Albis. He is also one of four players to have defended their World Championship title successfully.